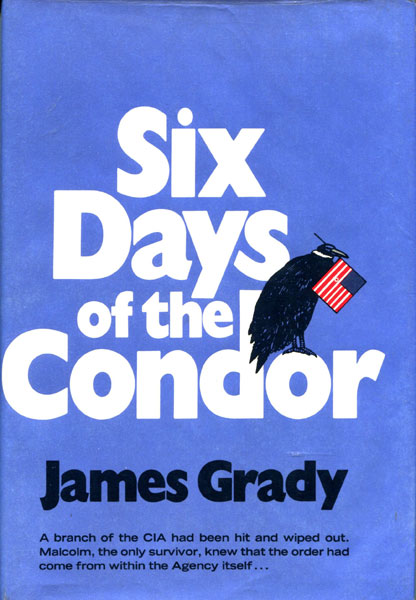 Six Days Of The Condor

First edition. A bit of light foxing to front and rear endpapers, else fine in corner-clipped dust jacket. Basis for the 1975 Paramount movie Three Days of the Condor, that starred Robert Redford and Faye Dunaway. Ronald Malcolm works for the "American Literary Historical Society" and reads detective and mystery novels to summarize its plots for his employer. One day Malcolm goes out for sandwiches for the office. When he returns, he find that all of his co-workers have been killed by professional assassins. Malcolm immediately calls the "panic number" to report the maximum damage. He is instructed where to make contact where he'll be brought in safely, but when he arrives at the rendezvous point, his rescue team takes a shot at him. Malcolm escapes and goes underground. Will Malcolm be rescued by the CIA or found by the killers? And who is the double agent?

The Killer In Me
by Olivia Kiernan

The Semonov Impulse.
by James. Meldrum

The Judas Goat.
by Robert B. Parker