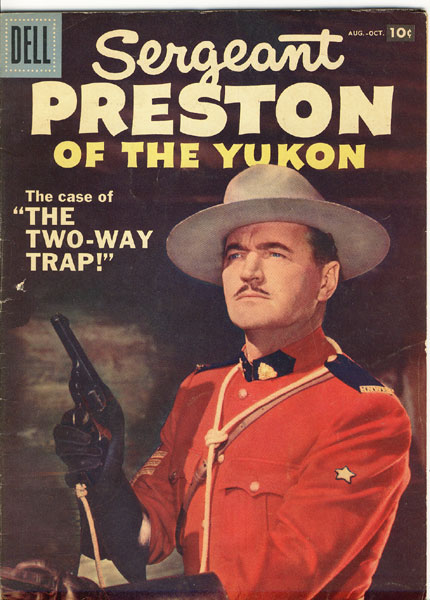 
First edition. Colored pictorial wrappers, 7 1/4" x 10 1/4" comic book, 36 pp., illustrated. Photo cover of Sergeant Preston [as played by Dick Simmons]. A Wolf Named Rob; Dave takes a wolf cub as company for the summer when his brother is away, and he calls it Robinson Crusoe. Snow Blind; The Graysons are held in captivity by a man who will force them to take him to their gold strike. The Two-Way Trap; three jailbirds have held up the store and stolen money, weapons and clothes; they left behind their jail clothes, and that was their blunder. Gray Wolf Leader of the Wolf Pack story. Scripts by Gaylord Du Bois, art by Alberto Giolitti. Cover price 10 cents. Former owner's name in ink on inside margin of first page, else very good copy.