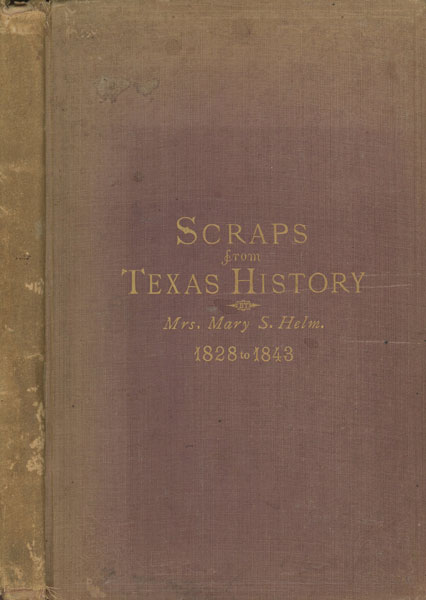 Publication: Printed For The Author at the Office of B R Warner & Co, 1884, Austin

First edition. 8vo. Maroon blind stamped cloth, titles stamped in gilt on front cover, marbled endpapers, iv, 198 [1] pp., introduction, appendix. Basic Texas Books 90 says, "This valuable book contains not only the personal recollections of Mrs. Helm in Texas, but also a lengthy description of Texas written in the 1820s by her first husband, Elias R. Wightman. One of Stephen F. Austin's Old Three Hundred, Wightman came to Texas in 1824 as a surveyor for the new colony. According to Mrs. Helm, he wrote the first decription of the colony and "compiled the first map of Texas in 1828, from which all subsequent maps obtain their basis." She includes an account of the Texas Revolution from a woman's point of view, with her first husband, Elias R. Wightman, founded the city of Matagorda, Texas, in 1828-9, she also relates her adventures in Texas between 1828 and 1835, including the initial colonization of the Matagorda Bay area. Wightman's very valuable description of Texas written while he was surveyor for Stephen F. Austin is the best by far up to that time. This copy has the "Monumental Inscription ... On Mr. Helm's Side Of Monument," not found in all copies. Former owner's brief inscription at bottom on title page. Moderate wear to spine ends and corners, else a very good copy of a very scarce book.

Compendium Of Information Concerning The City Of Tacoma …
by Allen C. Mason

Helldorado. Bringing The Law To The Mesquite.
by William M. Breakenridge