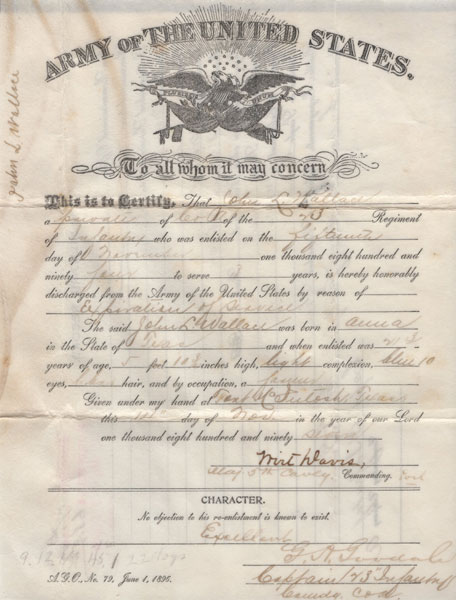 Discharge document for John L. Wallace from Anna, Texas who enlisted in 1894 for a term of three years and is being honorably discharged in 1897 having completed his term of service. His discharge papers are signed by Major Wirt Davis of the 5th Cavalry and Post Commander. Fort McIntosh was a U.S. Army base in Laredo, Webb County, Texas, that existed from 1849 to 1946. It was founded on the banks of the Rio Grande at Laredo in 1849, right after the Mexican War, it policed the international boundary and defended settlers from hostile Apache and Comanche Indians. Originally, it was named Camp Crawford, but renamed Fort McIntosh in 1850 in honor of Lieutenant Colonel James Simmons McIntosh, a Mexican-American War hero. Wirt Davis (1839-1914) was a famous and much decorated Indian fighter. Some of his gallant action took place against Indians on the North Fork of the Red River on September 29th, 1872 and in action against Indians in the Big Horn Mountains in Montana November 25th, 1876. This second battle was the famous "Dull Knife" fight in which Colonel Ranald McKenzie and the 4th U. S. Cavalry fought Dull Knife's Cheyenne Indians during Crook's winter of 1876 campaign. While at Fort McIntosh Wirt Davis"s cavalry fought Apache and Comanche invaders. Creases from having been folded and an old small water stain in the unprinted margin, else a very good copy with the elusive Wirt Davis signature.

Purple Sage. The Exploits, Adventures, And Writings Of …
by Glenn Shirley

Quite A Beach
by Tom Lea