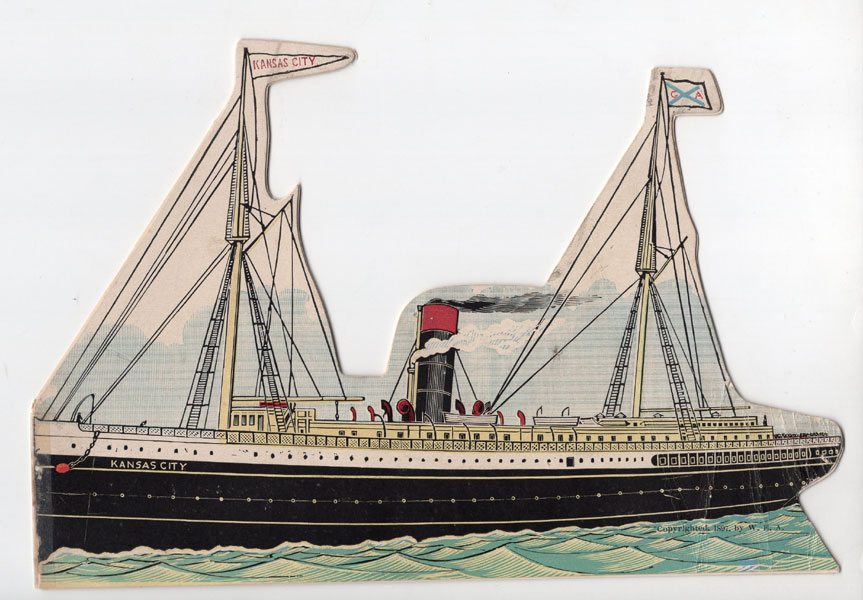 Savannah Line. Ocean Steamship Company Of Savannah Between Florida, Georgia And The South And Southwest And New York, Boston, Philadelphia And The East

Approximately 5 1/2" x 9" colorful die-cut brochure in the shape of the ship, "Kansas City." [12] pp. Illustrations. Overview of the Savannah Line and its fleet. Information on tickets, charge for children, meals, seats at table. Information about improvement to the passenger ships of the Savannah Line fleet to include sea spray baths, electric lights, re-carpeted and handsomely furnished state rooms, modern sanitary arrangements; history of the Savannah Line; and nice description of their newest steamship in the fleet, "Kansas City," which travels between Savannah and New York. Black and white photographs of happenings aboard the ships to include tourists leaving and arriving in ports, sailors performing various tasks aboard ship, etc. Wrappers are lightly soiled; spine has been reinforced with tape, light crinkling to opening edge of front wrapper, along with scraping to edge of rear wrapper, removing "SA" of the word "Savannah." Interior clean. Very good. The KANSAS CITY built in 1889 was the company's biggest vessel of 3,679 gt at that time.

For Good Or Bad. People Of The Cimarron …
Stephen Zimmer [Compiled And Edited By]

"A Texas Sheriff." A Vivid And Accurate Account …
by Henry C. Fuller

Rails To Carry Copper. A History Of The …
by Gordon Chappell

The Spanish Regime In Missouri
by Louis Houck