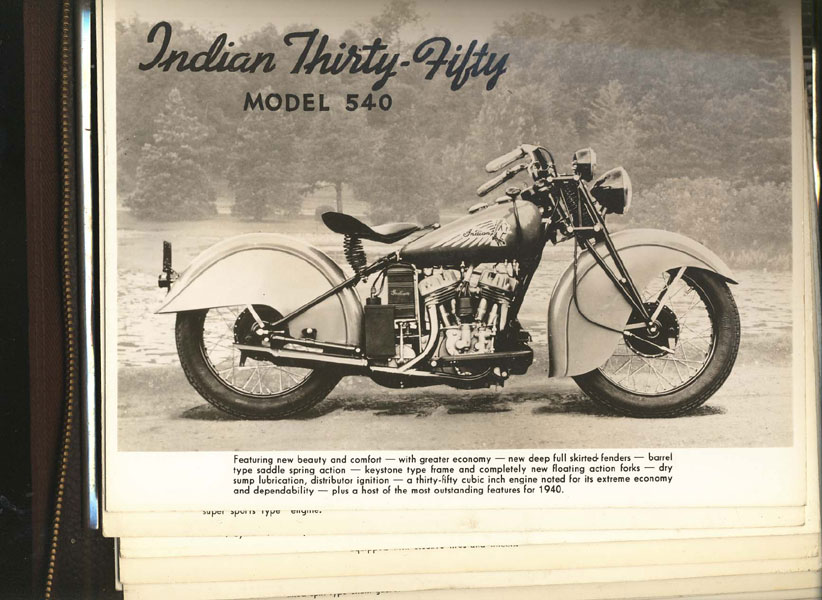 This a presumed company-issued production, no doubt targeted for those who already owned an Indian Motorcycle franchise, or generated for traveling company representatives, allowing prospective buyers, such as police departments, to view the entire product line. Photographs measure 6-3/4” x 9-3/8”, with 3-4 line captions beneath. They are mounted mounted back to back with wire rod at top, in a flip frame, all housed in a zipper-closed full leather portfolio measuring 13 3/4" x 12 1/4." We find no bibliographical record of another such album being offered, and believe the album to have been produced in limited numbers. This visual offering begins with the Indian Thirty-Fifty, Model 540. The grouping of photos include the models and new features of each cycle available. Some have been airbrushed to delete the backgrounds and insure a faithful representation. These include the: Model 337-Standard Indian Y Chief; Model 637-Standard Sport Scout 45; Model 437-Sport Indian Four; Model 537-Indian Junior Scout; Model 237- Standard Indian Scout 45. Next are the photographs showing the special models for that year (with the above models being factory direct). They include; Indian Police Special Seventy-four; Police Special Indian Four; Indian Four (model 441 with four-cylinder air-cooled in-line engine”); Indian Chief Seventy-four (Model 341); Standard Body Indian Dispatch Car; Large Body Indian Dispatch Car; Indian Thirtyfifty (Model 540); Indian Sport Scout 45 (Model 641); Indian Thirty-fifty (Model 541); Side Van Commercial Indian Motorcycle; Indian Police Car; Indian Dispatch Tow Model DT-27; Indian Dispatch Tow Model DT-33; Indian Dispatch Tow Model DT-29, etc. The DT models are all three-wheel vehicles for either police use or delivery companies. Many of the remainder of the photographs show Indian Motorcycles in use, with numerous pictures of various police departments that had adopted Indians for their use. Some of the police departments include Denver Police Department, Oklahoma Highway Patrol, Iowa Highway Patrol, Illinois State Highway Maintenance Police, New York City Police, Pennsylvania State Highway Patrol. Massachusetts State Police. In the mid-30s Indian was in fierce competition with Harley-Davidson to provide police departments across the county with motorcycles. Also included are various transformations of the Dispatch Models including a fine one of a fleet of the custom built DTs for the Biltmore Florist of Los Angeles. There is also an armored Indian with armored side car (with two police officers seated and machine guns jutting out the front), another full page photograph of a fleet or armored motorcycles in Peru, and one racing photograph and one rally photograph. The “Indian Motorcycle Co.,” represented visually herein by a birds-eye view of their factory in Springfield, MA, "was originally founded as the Hendee Manufacturing Company by George M. Hendee in 1897, manufacturing bicycles. Carl Oscar Hedstrom joined in 1900. Both Hendee & Hedstrom were former bicycle racers and manufacturers, and they teamed up to produce a motorcycle with a 1.75 bhp, single-cylinder engine; this was accomplished in Hendee’s home town of Springfield. The bike was successful and sales increased dramatically during the next decade. In 1901, a prototype and two production units of the diamond framed Indian Single were successfully designed, built & tested. The first Indian motorcycles, having chain drives and streamlined styling, were sold to the public in 1902. In 1903, Indian’s co-founder and chief engineer Oscar Hedstrom set the world motorcycle speed record (56 mph). The Scout and Chief V-twins, introduced in the early 1920s, became the Springfield firm’s most successful models. Designed by Charles B. Franklin, the middleweight Scout and larger Chief shared a 42-degree V-twin engine layout. Both models gained a reputation for strength and reliability. In 1930, Indian merged with DuPont Motors. DuPont Motors founder E. Paul DuPont ceased production of DuPont automobiles and concentrated the company’s resources on Indian. Models of that era had Indian’s famous head-dress logo on the gas tank. Indian’s huge Springfield factory was known as the Wigwam, and native American imagery was much used in advertising. In 1940, Indian sold nearly as many motorcycles as its major rival, Harley-Davidson. At the time, Indian represented the only true American-made heavyweight cruiser alternative to Harley-Davidson." Indian’s most popular models were the Scout, made from 1920 to 1946, and the Chief, made from 1922 to 1953. Unfortunately, the company went bankrupt in 1953. Today, the vintage cycle enjoys much popularity among enthusiasts, with models from the era displayed herein being offered for 5-figure sums. Modest wear to the portfolio spine. Light wear to edges of photographs. Very good plus.

The Range Men. The Story Of The Ranchers …
by L. V. Kelly