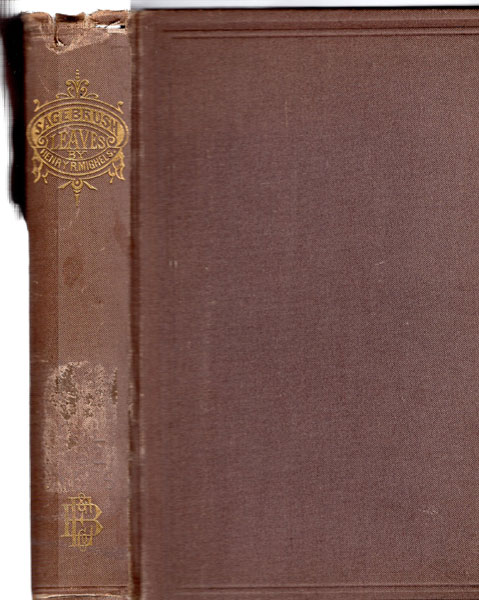 First edition. 12mo. Original brown cloth, dark brown front and rear endpapers, titles stamped in gilt on the spine, [6], 335 pp., albumen photograph frontispiece with facsimile signature below. A posthumous collection of essays, letters, and notes by the popular Nevada journalist and editor of the CARSON APPEAL. Henry Mighels died in 1879, just shy of fifty years of age, and his widow published these writings in order to defray his medical and funeral expenses. Born in Maine, he came to California in 1851 and after a time began a long career as a journalist and editor, with a return to the East for Civil War service, followed by a decade in Nevada, where he edited the APPEAL and dabbled in state politics. Included are Mighels' writings on politics, mining, the Chinese question, an 1877 trip from Carson City to Lake Tahoe, and a concluding section of his letters from the French Hospital in San Francisco in 1878. A selection of "Letters from Lake Bigler," were written during a stay at Lake Tahoe in 1877. This copy bears the bookplate of Catholic priest and noted book collector, Joseph M. Gleason. An ex-library copy with evidence of a label removal from the spine and two ink stamped numbers (on copyright page and lower margin of one text page). Former owner's bookplate on front pastedown sheet, cloth lightly rubbed and light wear to spine ends, else a very good copy.

Buckeye Printer.
by Charles A. Mitten

The Way To Rainy Mountain
by N. Scott Momaday