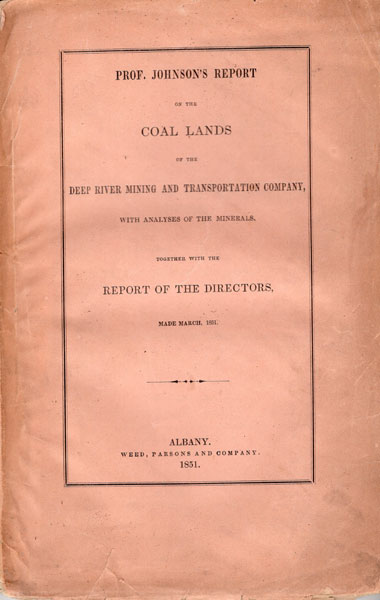 Report Of The Coal Lands Of The Deep River Mining And Transportation Company, In Chatham And Morre Counties, North Carolina. With Analyses Of The Minerals

9 1/2" x 6" in peach printed wrappers. Rear wrapper missing. 39 pp. 5 Maps. Appendix. Also offers the Report of the Directors of the Deep River Mining and Transportation Company, March, 1851. Walter Rogers Johnson was a distinguished geologist and chemist. In October 1849, while on a tour to middle and western North Carolina, he stopped at the Deep River coal region, spending several days examining the outcroppings and mine workings. After the North Carolina General Assembly passed legislation to incorporate the Deep River Mining and Transportation Company, the company engaged the services of Johnson to conduct an analysis of the mineral content on their property in Chatham County. "In his report to the directors of the Deep River Mining and Transportation Company, William Rogers Johnson's observations and analysis centered on the geology of the coal lands as well as projected expenditures and income the company would need to consider. Agriculture and woodlands factored into the overall costs as well since the report made provisions for supplying new mining communities with produce as well as timber for structures and mine props. In the construction of a mining town the company assumed a great risk by the scope and expense of the project which could deplete capital already allocated to mining operations or transportation. Johnson based his report on findings he made by sampling coast from three open pits within the overall Farmersville area. Using eight different samples of coat taken from the pits, he next formed a mixture of forty specimens to obtain an average specimen of the whole. Johnson's conclusions eventually presented to the board of directors that Deep River coal was equal in thickness to the Pittsburgh seam and not inferior to the main seam at New Castle were encouraging along with its quality, 'well adapted to domestic use, to metallurgic arts, and to steam navigation.'" Black and white maps include 1. Map of a Part of North Carolina. Showing the Slack Water Navigation of Cape Fear & Deep Rivers; 2. Profile of the Cape Fear and Deep River Slack Water Navigation; 3. Map of Chatham County N.C. Showing the position of the coal Mines on Deep River; 4. Deep River Mining & Transportation Co's Coal Mines; and 5. Section near Stewell's Millstone quarries on Richland Creek Moore County N.C. Pages 33 - 39 uncut. Small water spot to top edge of first 10 pages along with small library stamp to title page. Wrappers soiled and chipped at edges and at spine.

Laws, Courts, And Lawyers, Through The Years In …
JAMES M. MURPHY