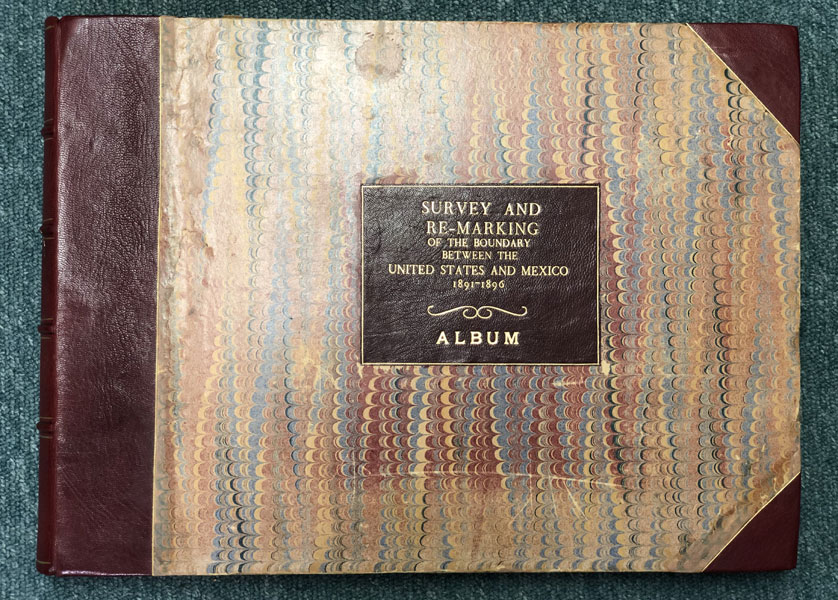 First edition. Oblong 11" x 15 1/2" quarter leather and marbled boards, leather label on front cover with titles stamped in gilt, raised bands on the spine, marbled front and rear endpapers, n. p. [260 pp.], printed rectos only, including 258 full-page half-tone photographic plates. Senate Document No. 247, 55th Congress, 2d Session, 1899. An important photographic record of the actual border markers and surrounding landscapes located along the border line between the United States and Mexico from southern New Mexico to the Pacific Ocean. Each photograph is captioned in English and Spanish. Some photographs include human figures – surveyors, their assistants, and local residents – on foot and on horseback next to the border markers. Some animals have also managed to sneak into a couple of the photographs. This album was designed to accompany the two-volume report published a year earlier. Rarely encountered in the marketplace, and the first copy of the album offered by us. A few minor scrapes and rubs to the marbled boards and minor wear to the front free fly leaf, the interior is clean and bright, else a near fine, bright copy of a very difficult title.

The Texas Rangers.
by Chuck. Parsons

Charles Schreiner General Merchandise: The Story Of A …
by J. Evetts Haley