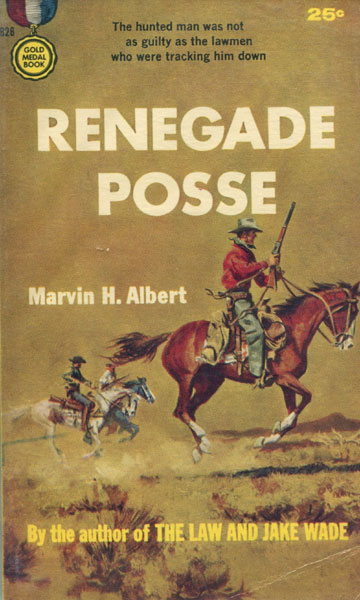 First edition. Generic inscription that reads, "One of my better westerns...it was made into a movie. Marvin H. Albert." PBO. GM 826. Near fine in pictorial wrappers. Movie starred Audie Murphy as the hero. Albert wrote some excellent hard-boiled mysteries as Albert Conroy, Nick Quarry, and Anthony Rome, and several other pseudonyms. Until his death a few years ago, Albert lived in a mountaintop villa on the coast of France, and seldom signed any of his 70 plus books. In this book Keliher, along with several deputies .... a hired gun, a drunken buffalo hunter, a stablehand, a saloon bouncer ... is to ride after one of the most deadly outlaws in the territory. But why had such a motley crew been assembled to go after such a dangerous man??? Suddenly Keliher realized that the posse had intended to find the outlaw and keep the money for themselves. That meant the Keliher and the hunted outlaw were on the same side .... against the deputies!

The Singing Cowboys.
by David Rothel

Service Of All The Dead.
by Colin. Dexter