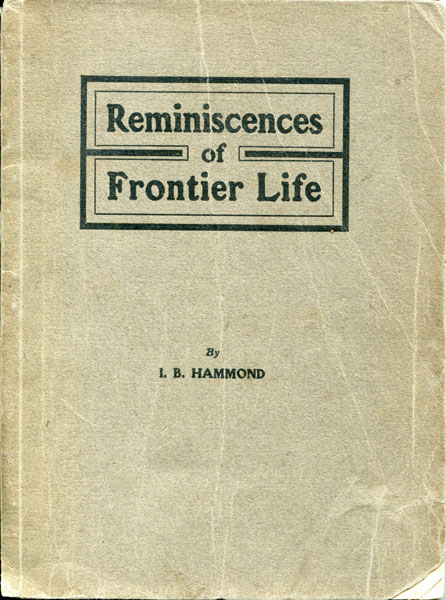 by Isaac B. Hammond

First edition. 8vo. Original grey printed wrappers, 134 [1] pp., introduction, illustrated, plates. The author's reminiscences, written primarily for his friends, tells of his travels and experiences throughout the West and Alaska. He tells of Indian scares, gold mining, outlaws, buffalo hunts, prairie fires, a Nebraska blizzard, the Black Hills, the Rocky Mountains, Custer's massacre, and much more. Six Guns 912 says, "Rare." "Privately printed for friends. The author died while the book was in press. The printer, no doubt believing that he would not recover his printing costs, scrapped almost the entire edition, only a few copies escaping; hence its rarity. It contains material on some outlaws of the frontier and tells about the hangings by the vigilantes and about the last of Laramie road agents." Howes H142 says "Most of the edition "scrapped" to a paper mill." Graff 1760 says "Contains a narrative of a trip across the plains in '65. -EDG." Phillips American Sporting Books p. 155, "Chapter on a buffalo stampede." Over-sized covers lightly chipped at fore-edges, faint vertical crease to the front cover, light wear to the spine ends, else a very good copy.

Young Cowboy
by Will James

The Resources Of New Mexico. Prepared Under The …
by Territorial Bureau Of Immigration

The Flavor Of Texas.
by J. Frank Dobie