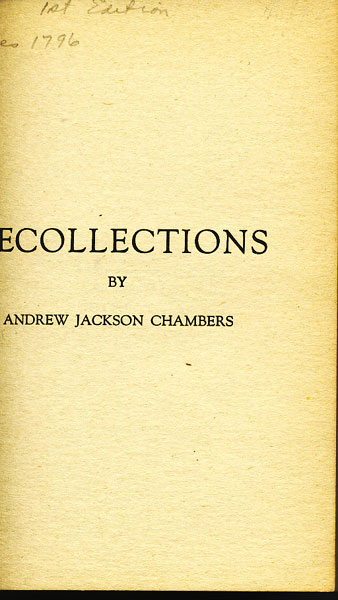 First edition. 18mo. Unprinted wrappers, 40 pp. Chambers and his family left Morgan County, Missouri, in 1845 and settled on the Puget Sound in 1847. Mintz 85 says "The Chambers family crossed the plains in 1845, wintered at the Dalles, later moved on to Oregon City, and finally settled at Tualatin Plains. Chambers was a participant in the Indian Wars of 1855-56. This very scarce little book was written in 1904, but not printed until 1947, when only a few copies were done." This work is important for the author’s description of the overland trip, his reminiscences of the Oregon Wars of 1855-56 and his notes on doctoring, burial, and religious practices of Indians on Chambers Prairie. Fine, unread copy.

Reminiscences Of A Veteran
by Henry S. Hamilton