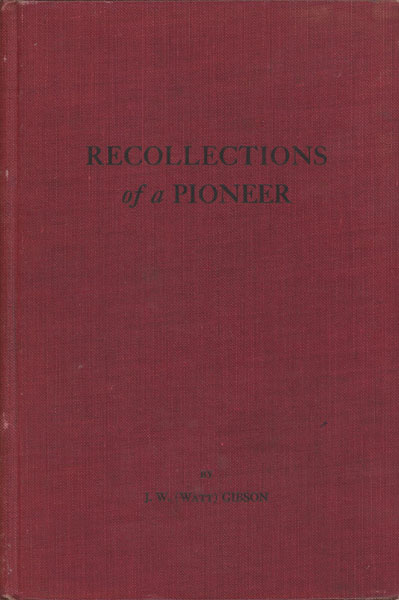 Recollections Of A Pioneer.

First edition. 8vo. Red cloth, decorated endpapers, 216 pp., foreword. A rare title and rarely offered on the market. Herd 891 says, "Chapters on driving cattle across the plains." Howes G 154 "aa" One of the earliest cattle drives across the plains to California in 1852. A Merrill Aristocrat p. 21. Mintz 176 says "Gibson made the first of his three overland trips in 1849 and here relates experiences and adventures in the land of gold mining. He returned to Missouri in 1851, and then returned to California in 1852, driving cattle along the way. Gibson made another cattle driving trip in 1854. He went to Salt Lake City in 1865 and Montana in 1866. Quite an adventurer and quite engaging reading." Dobie, p. 103: "Like many another book concerned only incidentally with range life, this contains essential information on the subject. Here it is trailing cattle from Missouri to California in the 1840s and 1850s." Kurutz, California Gold Rush 272: "Gibson had the distinction of making three overland trips, the first in 1849. The author set out from Buchanan County, Missouri, with brothers William and James. They followed the California Trail and crossed the Sierra via Carson Pass. The brothers first mined for gold on Weaver Creek in August. Gibson then wandered from Sacramento to Shasta City before joining up with fellow Missourians at Salmon Falls. With his brothers, he started ranching but returned overland to home to bring cattle back to California. In May 1850, Gibson led 550 head back to the ranch. The rancher made two more trips in 1853 and 1854. According to Dale Morgan, 'His original return trip was one of the rare West to East trips that year.'" Gibson includes several chapters on his participation in the Civil War, in both Missouri and Arkansas, in Musser's 8th and 9th Missouri Infantry. In 1861 he joined Elijah Gates' company just after the Battle of Wilson's Creek, went on to fight at Lexington and Pea Ridge, then joined the Confederate army in John B. Clark's division. One particularly grim event he relates is how a company of artillery was overrun by a company of African-Americans who promptly killed the survivors (pp. 154-155). Minor wear to the spine ends and corners else an internally clean and tight near fine copy of a difficult title. Housed in a matching cloth slipcase with leather label on the spine and titles stamped in gilt.

Thomason: The Autobiography Of A Federal Judge.
RAY, JOSEPH M. [EDITED AND ANNOTATED BY].

Colorful Art By Fred Harman, Creator Of The …
FRED HARMAN