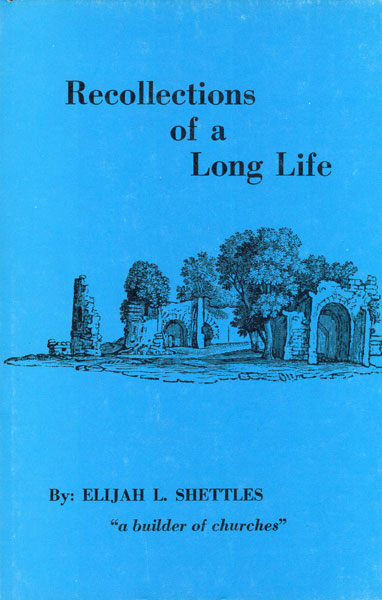 Recollections Of A Long Life.

by The Rev. Elijah L. Shettles

First edition. Cloth, xix, [1], 186 pp., introduction, foreword, illustrated, plates, portraits, index. Foreword by J. Frank Dobie. Edited with an Introduction by Archie P. McDonald. Autobiography of Rev. Elijah L. Shettles, 1852-1940. Civil War experiences, twenty years as a Texas gambler, thirty years as a Methodist minister, numerous years as a book collector and as a book seller. "Elijah Leroy Shettles was born in 1852 in the Flatwoods country of Mississippi near Pontotoc. During his eighty-eight years Shettles worked as a teacher, a farm-implement salesman, a law student, a pressman for a newspaper, a freight agent, a public weigher, a coal supplier, a gambler, a saloon-keeper, an insurance solicitor, a preacher, a church administrator, an editor, a book collector and dealer, and a representative of several university and public libraries. He was also a chaplain of the Texas Senate, a publisher of books, and a humanitarian. From 1881 to 1891 he traveled the Southwest as a hard-drinking, cheating, itinerant gambler, who frequently stopped long enough in a town to operate a gambling hall and saloon: most of these years he spent in Texas. Shettles responded to a revival preacher on April 27, 1891 and soon after felt a calling to the Methodist ministry. Shettles's ministerial career, all of it in Texas, spanned over thirty years. Always a devoted bibliophile, he revealed much of his secular reading in his early sermons. He became an accomplished preacher and in 1908 became assistant editor of the Texas Methodist Historical Quarterly. Shettles married Mrs. Elizabeth Letts, a widow, on December 11, 1894. They had no children but raised several foster children. Shettles retired in 1921 and moved to Austin, where he devoted himself to book collecting." Fine in dust jacket.

Letter From The Secretary Of War Ad Interim...Transmitting …
by U. S Grant

Views Of Utah And Tourist's Guide.
by C.R. Savage