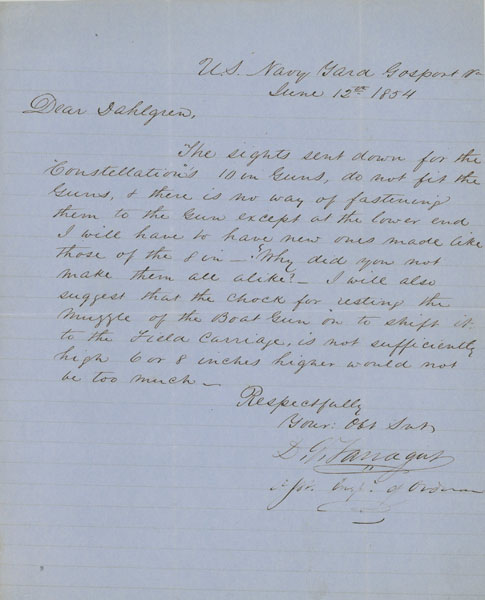 One-page autograph letter signed to Commander John Dahlgren, officer in charge of ordnance manufacturing at the Washington Navy Yard. Gosport, Virginia, U. S. Navy Yard: 12 June, 1854. 4to, approx. 100 words. In this letter Farragut (1801-1870), inspector of ordnance at Gosport, writes to complain of poor workmanship. "The sights sent down for the Constellation’s 10 in. Guns, do not fit the Guns, & there is no way of fastening to the Gun except at the lower end. I will have to have new ones made like those of the 8 in. Why did you not make them all alike? I will also suggest that the chock for resting the muzzle of the Boat Gun on to shift it to the Field Carriage, is not sufficiently high. 6 or 8 inches higher would not be too much." David Farragut was only nine years old when he was appointed a midshipman and shipped on the Essex with his guardian David Porter bound for the Pacific during the War of 1812. He somehow survived the bloody battle during which the Essex was severely beaten by HMS Cherub and Phoebe off Valparaiso, and, after several years with the Mediterranean squadron, rejoined Porter in the Caribbean in the early 1820’s as executive officer of Seagull aiding the Navy’s suppression of the West Indian pirates. He commanded Decatur during the Mexican War, but clashed with his commander, M. C. Perry, and returned home with a cloud over his head. Assigned to draft gunnery regulations, he became one of the Navy’s ordnance experts. In 1854 Farragut was ordered to the West Coast to establish a Navy Yard at Mare Island. He returned to the Atlantic in 1858 as commander of the new sloop-of-war Brooklyn. When Civil War erupted Farragut sailed in Hartford for New Orleans where he decisively defeated the Confederate Fleet. For this victory he was promoted to the rank of Rear Admiral, the first ever in the United States Navy. In August 1864 he once again commanded the Gulf Fleet and once again soundly defeated the Confederate Navy this time at Mobile Bay. It was during this battle that he uttered his now famous line "Damn the torpedoes!" Subsequent to the battle Abraham Lincoln signed a bill promoting Farragut to the rank of Vice Admiral. In 1866 Congress created the grade of Admiral and bestowed upon him that rank. The next year he was sent on a tour of Europe with the Franklin as his flagship where he was everywhere met with highest honors. He passed away quietly in 1870, a much-loved naval hero. Previous folds, else fine.

One Space/Three Visions
THE ALBUQUERQUE MUSEUM