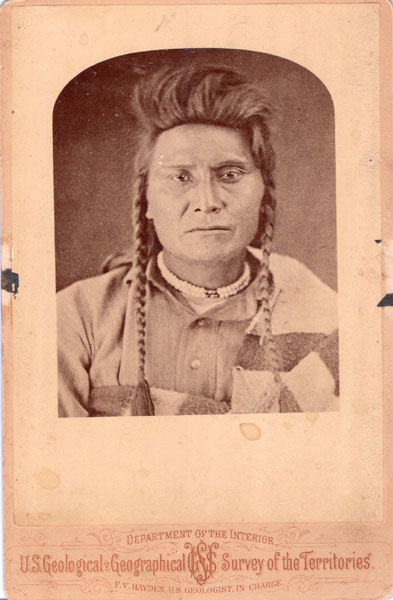 Rare U. S. Geological And Geographical Survey Of The Territories Cabinet Card Of Chief Joseph

5 1/2" x 4" cabinet card, mount size 6 1/2" x 4 1/4." "U. S. Department of the Interior -- U. S. Geological and Geographical Survey of the Territories" imprint on the front of the card. Written in pencil on the verso are the words "Chief Joseph" Leader of the Nez Perces War of 1877." The images produced by the U. S. Department of the Interior for the "Survey" were originally created circa 1868-1883, and consist primarily of portraits of male delegates to the United States with occasional images of women and children. The images were created for ethnographic portfolios for the Blackmore Museum in Salisbury, England. Wikipedia says: "The United States Geological and Geographical Survey of the Territories was established by an act of Congress on 2 March 1867 as an agency under the Department of the Interior (later the General Land Office) tasked to complete a geographical survey of the State of Nebraska which had been admitted to the Union the day before. The scope of the survey eventual grew to include all the American territories adjacent to the Rocky Mountains encompassing hundreds of thousands of square miles. The survey over its existence was headed by Dr. Ferdinand Vandeveer Hayden who published a number of reports between 1867 and 1883 on the region’s geography, geology, topography, ethnology, philology, paleontology and other allied subjects. Congress originally appropriated $5,000 in 1867 for the survey of Nebraska and a similar amount the following year to survey the Wyoming Territory. As the survey’s workload increased over its existence, so did its budget and by the end of its tenure in early 1880s, Congress had appropriated approximately $750,000 for the surveys of the West, a figure that did not include some clerical and printing expenditures." A very good portrait of Chief Joseph. Provenance: Robert G. McCubbin Collection.

Zeckendorfs And Steinfelds, Merchant Princes Of The American …
by Bettina O'Neil. Lyons