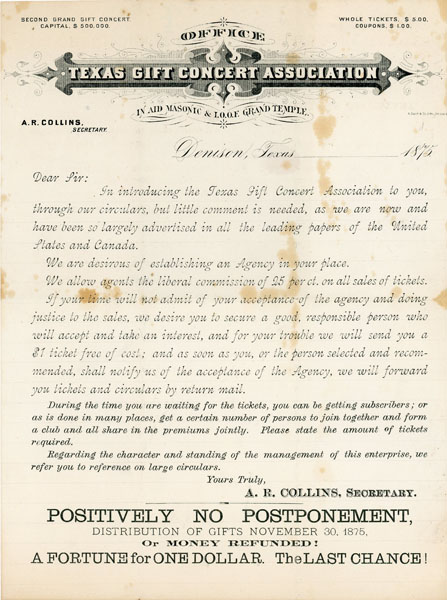 Other works by COLLINS, A. R.

In October 1874, notices began to appear in newspapers across the United States announcing a "Grand Gift Concert in aid of the Public Improvements in Denison, Texas." The organizers, who called themselves the Texas Gift Concert Association, claimed a concert would be held on December 31, 1874, at which time $250,000 in cash "gifts" would be distributed to lucky ticket holders. A one-dollar ticket purchase, they promised, might lead to a a return of $50,000! Names of prominent citizens of Denison were listed as references, and "good and responsible persons" were solicited to sell tickets for a "liberal commission." The appointed dated came and went with no concert and no drawing, purportedly because the Association said it had not yet sold all 500,000 tickets. But they promised the event was "now a fixed fact" and "a full drawing will take place positively on the day fixed," which was now March 31, 1875. After another postponement to May 31st, eventually some sort of concert and drawing were held, and the Association immediately went to work organizing a second event, this time to benefit the "Masonic & I.O.O.F. Temple" of Denison. The circular we are offering comes from the second round of ticket sales. Promising a drawing date of November 30, 1875, with "positively no postponement," and the lure of "A FORTUNE for ONE DOLLAR. The LAST CHANCE!," it seeks agents to sell tickets, for which they will receive a 25% commission. By this time, at least some people had become suspicious, and a Special Agent of the United States Post Office had been dispatched to investigate. On September 13, 1875, after speaking to dozens of witnesses, he reported that he had "confidently determined that the Texas Gift Association is false and fraudulent." Less than $1,800 had been received by the City of Denison, and the "drawing was a farce and fiction ...The facts are that only about $100,000 was ever received by [the Association] and the drawing was only a delusion and a blind. An examination of tickets sold showed that none were given out in consecutive numbers ... Even numbers were sold and odd numbers held by the managers. When the drawing was had tags were placed in the wheel representing unsold tickets and the prizes announced for them, which plan would enable the managers to manipulate the cash at their pleasure: to give out the prizes or withhold them at will. No names were called at the drawing, and when the list of those who had drawn prizes was published it was noticed that the numbers did not correspond with those published at the time of the drawing. Of course some money had to be given to ticket-holders to make a show. But the capital prize was awarded (70 per cent of $50,000) to a confederate of the managers, who, I am advised, received $500 for his services. In all, I believe, about three or four thousand dollars were disbursed to the public, leaving a very snug little sum to divide among the managers of this swindle." Although the Agent recommended that the Association be banned from using the mail, they continued to advertise heavily, and the cash kept flowing in. In 1880, the Postmaster General reported to Congress that it was "one of the most successful of all the swindles which the records of the department disclose." Aside from newspaper advertisements, printed materials relating to this rather audacious scheme are rare. Some light spotting to the document along with some faint fold lines, overall a very good copy.

The Land Of Palms And Sunshine. Miami By …
City Of Miami

Letter From The Secretary Of War Ad Interim...Transmitting …
U. S GRANT