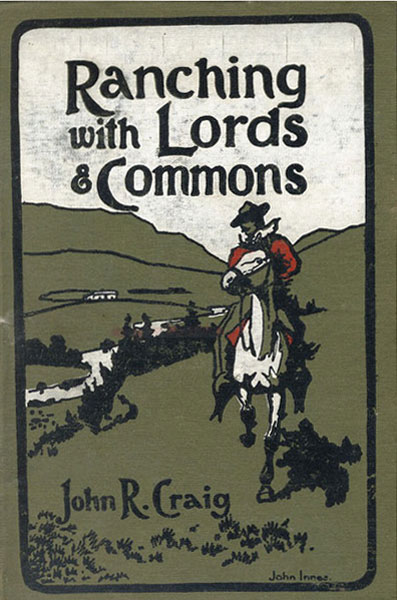 Ranching With Lords And Commons; Or Twenty Years On The Range. Being A Record Of Actual Facts And Conditions Relating To The Cattle Industry Of The Northwest Territories Of Canada; And Comprising The Extraordinary Story Of The Formation And Career Of A Great Cattle Company.

First edition. 8vo. Pictorial cloth, 293 pp., preface, illustrated, plates, portraits. Six Score 25 says, "Craig was an American who became manager of the Oxley Ranch in the province of Alberta during the 1880s. The book recounts a classic example of absentee ownership [by the British lords and commons referred to in the title] and the subsequent mismanagement brought about by conflicts between Craig and the owners. This book and that by L.V. Kelly are the best two books on Canadian ranching. Craig was bitter about his experience and his narrative is one-sided. For the owner's side, see A. Staveley Hill's FROM HOME TO HOME." Former owner's inked name on front fly leaf, white ink on cover is unchipped but white ink on spine panel is moderately chipped. Overall in much better condition than most copies, and is a very good tight copy.

The Story Of Early Days In The Big ...
by William S Lewis

The Mccartys, They Rode With Butch Cassidy
by E. Richard Churchill

Incident At San Augustine Springs. A Hearing For ...
by Richard. Wadsworth