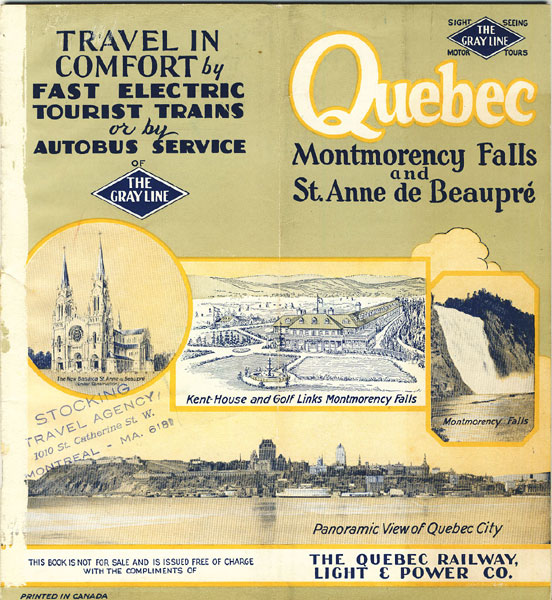 8 7/8" x 8 1/8" folded in half in green pictorial wrappers. 100 pp., illustrations, advertisements, maps. Overview and history of Quebec. Information on the Quebec Railway, Light & Power Co., Montmorency Falls, Citadel Brick, various activities available, etc. Much information on the Shrine of Ste. Anne de Beaupre, the disaster of March 29th, 1922, the relics, the miracles, the fountain, the Cyclorama of the Holy Land, etc. "The basilica in Sainte-Anne-de-Beaupré was initially a shrine to honor Saint Anne. On March 8, 1658, a man by the name of Etienne de Lessard donated two frontal acres from the West end of his property to the Catholic Church so that a chapel could be built. This chapel eventually became the site of the modern-day basilica. It was built for two reasons: to provide a place of worship for the new settlers in the area and to house a miraculous statue of St. Anne. The first reported miracle at the site happened during the shrine’s construction. A man named Louis Guimond was hired to help build the shrine even though he suffered from rheumatism. After placing three stones upon the shrine’s foundation, Guimond was cured of all his ailments. This was followed by other testimonies of healed people and the shrine soon grew in popularity. Many pilgrims came to the shrine hoping to receive a miracle. Because of the popularity of the shrine, the building was enlarged several times to accommodate all the pilgrims. In 1876, the first basilica opened for worship. On March 29, 1922, the basilica was destroyed by fire. The present-day basilica was built on the site of the prior church in 1926." Booklet offers an official guide to the historical sites of the Church of Ste. Anne de Beaupre and also a guide to the historical relics in the vestry. Numerous black and white photographs throughout. Wrappers and spine rubbed and worn and with travel agent's stamp to front wrapper. Spine had been reinforced with tape and the tape has been removed from spine of front wrapper, removing ink. Good. Interior clean.

The Lincoln County War. A Documentary History
by Frederick Nolan

Street Fight In Tombstone. Near The O.K. Corral.
by Michael M. Hickey