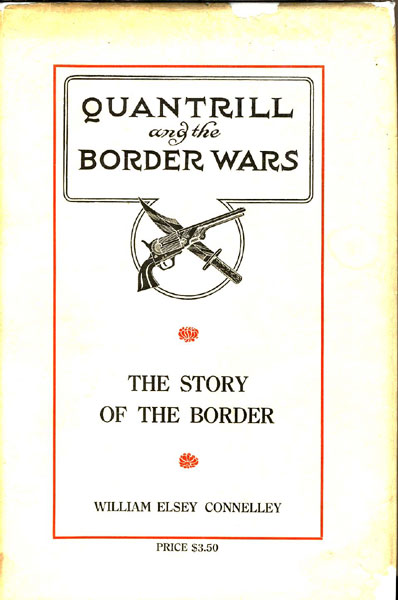 Quantrill And The Border Wars

Other works by WILLIAM ELSEY CONNELLEY

First edition. Cloth, 539 pp., + 2 page errata at end. Numerous illustrations and maps, index. An outstanding study of William Clarke Quantrill and the famous "Border Wars" in Kansas and Missouri in the 1860's. With the outbreak of the Civil War, Quantrill joined the Confederacy and fought at Lexington, Missouri. Preferring guerilla tactics, he organized his own gang of southern sympathizers. Although he failed to receive any Confederate endorsement or direct support, he and his men raided communities supposed to have Union sympathizers and robbed mail coaches. They frequently murdered citizens who were suspected as Union sympathizers. In 1862, Quantrill and his gang were declared outlaws by Union officials. Quantrill helped Confederate troops capture Independence, Missouri in August, 1862. A year later Quantrill, with 300 men plus another 150 men who were loosely allied to him descended on Lawrence, Kansas, burning much of the city down and killing nearly 150 citizens. A few weeks later, after defeating a small group of Federal soldiers at Baxter Springs, Kansas, Quantrill put the Federal prisoners to death. Quantrill was finally mortally wounded in 1865 by Federal troops during a raid into Kentucky in which he led only 33 men. Many later outlaws rode with Quantrill during those violent years. Frank James, Jesse James, Cole Younger, and other noted outlaws are among them. Fine, bright, copy. The rare dust jacket has some chipping to edges, a few short closed tears, and some light general soiling, yet still attractive and nearly complete.

Expose Of Polygamy In Utah. A Lady's Life …
MRS T. B. H. STENHOUSE

A Cowboy Detective, A True Story Of Twenty-Two …
CHARLES A. SIRINGO