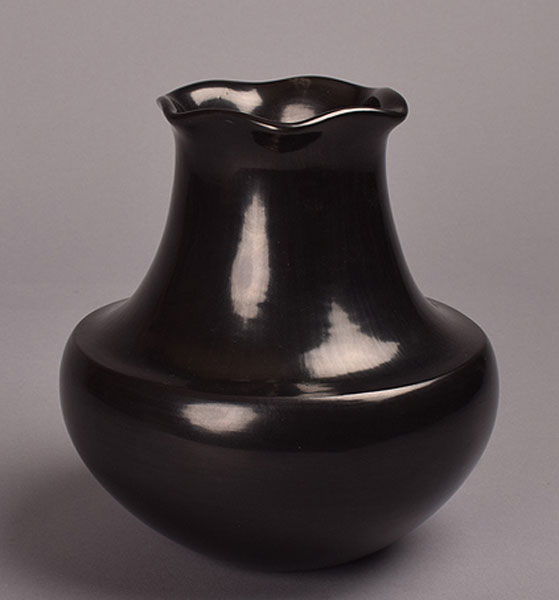 This Polished Black Jar with Fluted Rim is in like new condition. There are no scratches or flaws. The medium for this jar is clay and it is 7" height x 6" diameter. It was made at Santa Clara Pueblo, New Mexico in 1989 by Tina Garcia (1957-2005). This piece is not only well-crafted, it is absolutely perfect. Tina Garcia was born at Santa Clara Pueblo in 1957. She was the granddaughter of Santa Clara potter Severa Tafoya and the niece of Angela Baca. She spent her childhood watching her grandmother, mother and aunt make pottery. In the pueblo way, a child learns by watching and assisting the older potters during the entire process of making pottery, from the gathering of the materials to the final firing. Tina was making her own pottery by the age of 11. As a young adult, Tina spent time at the School of American Research (now School for Advanced Research) studying its pottery collection. After careful study she decided that she wanted to make her living as a potter and focus exclusively on the traditional shapes of Santa Clara pottery, not the carved ware for which Santa Clara is known. Her pieces are characterized by exquisite shape ad perfect polish. During her short career she won numerous awards at Santa Fe Indian Market and the Heard Museum Show. Her work is included in the collections of the Heard Museum in Phoenix Arizona and the Denver Art Museum. This pot features a traditional Tewa jar shape . A wide body that rises up to meet a sharp shoulder. From the shoulder, the neck gracefully ascends up to a fluted rim. The classic shape is enhanced with the artist's amazing polish finish. Looking at this it is easy to see why Tina Garcia was the recipient of so many awards.

The Night Hawk In His Nest. Matted Original …
by L.A. Huffman

Sheriff Of Yavapai: An Account Of The Career …
by Danny. Freeman

The Mountain Men And The Fur Trade Of …
Leroy R. Hafen [Editor]