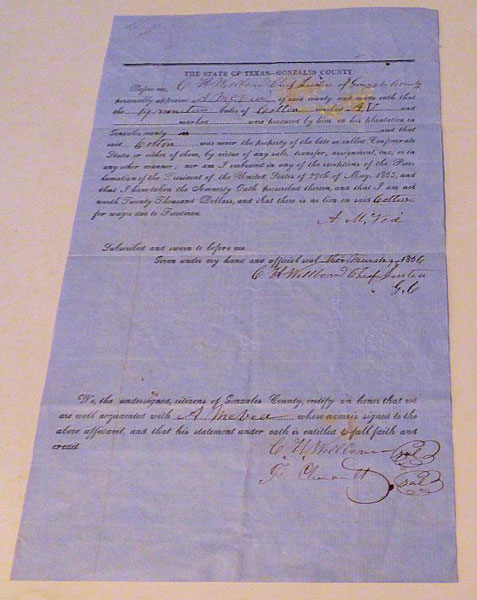 Partially printed "Planter's Oath" for Gonzales County, Texas. Approximately 8" x 12." Blue paper watermarked with a federal shield and stars. The oath was signed by A.M. Vea (perhaps A. McVea or A. McVeos) before C.H. Wellborn, the county's Chief Justice. In it Vea swears that 1) his 19 bales of cotton were never the property of the Confederacy, 2) he was unembraced by any of the exceptions of the Presidential proclamation of 29 May 1865, 3) he had already taken the Amnesty Oath, 4) his net worth was less than $20,000, and 5) there was no lien on the cotton for wages due to Freedmen. Light soiling and wear. Expected file folds. Very nice shape overall. Early in the American Civil War, the U.S. Congress passed two "Confiscation Acts" that authorized Union commanders to seize the property of all those participating directly rebellion. After the war ended and Union forces occupied the entire South, this placed an incredible hardship on Southern civilians whose property, including crops, were seized. So, on 2 May 1865, President Andrew Johnson proclaimed amnesty and the return of property to Southerners who would take an oath of allegiance to the United States. As a result, "military commanders during reconstruction were flooded with claims for the return of real estate, livestock and cotton. Cotton was at the forefront of all claims, having been seized by Federal troops upon occupation and sold at auction by Treasury agents. In Texas, owners filed "Planters' Oaths" to establish private rather than government ownership of their cotton." (See Parole, Pardon, Pass and Amnesty Documents of the Civil War by Davis and Tremmel). Extremely scarce.

Selections From The Youth's Companion For Supplementary Reading. …
The Youth'S Companion

Charles Schreiner General Merchandise: The Story Of A …
by J. Evetts Haley