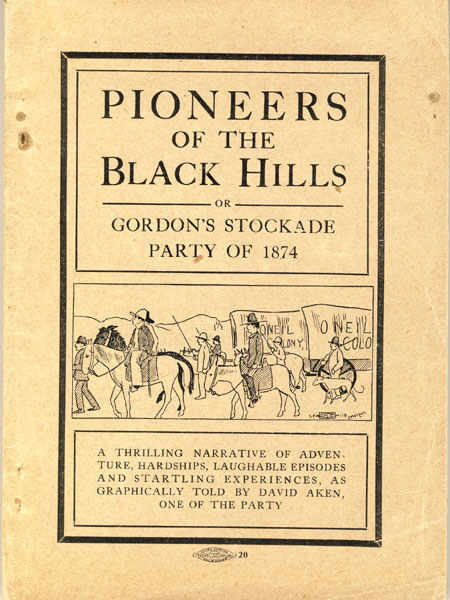 Pioneers Of The Black Hills Or, Gordon's Stockade Party Of 1874. A Thrilling Narrative Of Adventure, Hardships, Laughable Episodes And Startling Experiences, As Graphically Told By David Aken, One Of The Party.

First edition. 16mo. Pictorial wrappers, 151 pp., frontis., preface, illustrated. Howes A 94 says "Narrative by one of twenty-eight members of Gordon's gold-seeking expedition of 1874, made in defiance of government orders." Graff 26 says "Although the Federal government had denied civilians access to the gold fields discovered in the Black Hills by Custer's command in 1874, Charles Collins, editor of the Sioux City Times, organized a party of twenty-eight adventurers to prospect. They established Gordon's Stockade on French Creek. It was disbanded by Federal troops in 1875." Jennewein 96 says ""We found gold about wherever we dug along the valley of French Creek, about as good in one place as another, reported Aken. In February, two of the party, Gordon and Wicher, started for Sioux City with samples of gold, and in March four men started for Cheyenne. In April the remaining members were escorted out of the Hills by the U. S. Cavalry and returned to Sioux City by way of Fort Laramie and Cheyenne." "The Aken book is important to the collector for it describes the efforts of the first group of private citizens to make the Hills their home. It contains valuable detail and is frequently marked with anecdote and circumstance of a lighter order." A little light soiling to covers else near fine copy. HOWES A94. GRAFF 26. JENNEWEIN 96.

Grandad And I. A Story Of A Grand …
by Florence. Fenley

Photograph Album Of Travel To California, Colorado, Arizona, …
by Anonymous