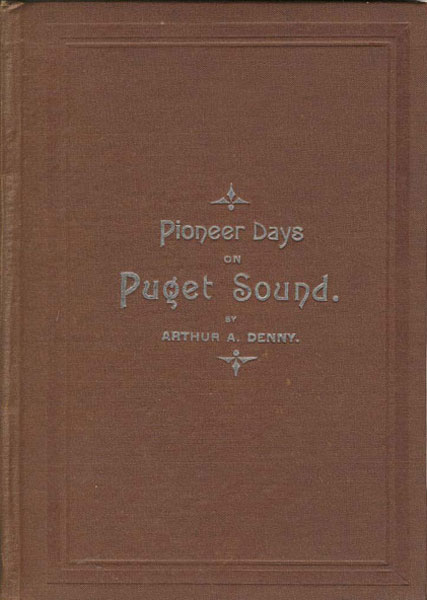 Other works by ARTHUR A DENNY

6 3/4" x 4 3/4" in brown printed boards with title in silver. 83 pp., errata. Pioneer Arthur A. Denny writes about the early days of Seattle as he remembers cabins and sawmills, steamboats on the Sound, Indians, soldiers and settlers. Denny was the leading founder of the town of Seattle. In 1851 he left Illinois and migrated westward with his family and acquaintances, intending to settle in the Willamette Valley. Hearing about the area around Puget Sound, the Denny Party sailed from Portland, landed at Alki Point in November 1851, and four months later staked claim to land along the eastern shore of Elliott Bay, in what would become the city of Seattle. A surveyor by trade, Denny helped lay out the real estate that formed a large part of the pioneer economy. He served as postmaster, merchant, banker, and legislator. Over the course of his life, Denny witnessed or participated in most of the key events in early Seattle history to include the founding in 1851-52, the Indians’ attack on Seattle in 1856, the creation and siting of the University of Washington in the early 1860s, the courtship of railroad companies during the 1870s, and the labor unrest and anti-Chinese movement of the 1880s. In 1843 Denny married Mary Ann Boren, and together they had six children. Mary Ann Denny neatly wrote on the rear free endpaper, “Mrs. Dullie Miller from Mrs. Mary A. Denny, June 11, 1905." A fine copy.

The Lady Of The Rose. The Story Of …
DOROTHY DEVERE

Transactions Of The Sixteenth Annual Reunion Of The …
Oregon Pioneer Association