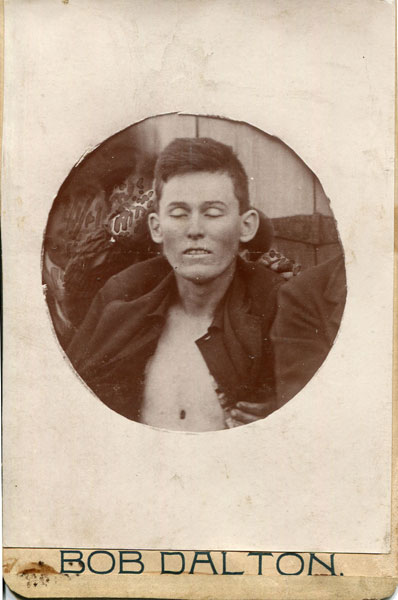 Photographs - - - The Dalton Gang Members In Death .. Killed During The Attempted Simultaneous Robbery Of Two Banks In Coffeyville, Kansas ... October 5, 1892

THE BOLDEST BANK ROBBERY ATTEMPT IN AMERICAN HISTORY ... EIGHT MEN DEAD & SEVERAL OTHERS WOUNDED! On the morning of October 5, 1892, Bob, Grat, and Emmett Dalton, along with fellow gang members Dick Broadwell and Bill Powers rode into Coffeyville, Kansas, with ambitious plans to rob the C.M. Condon Co. Bank and the First National Bank ... at the same time! Fortunately for him, gang member Bill Doolin was left behind due to his lame horse. Although the Dalton Brothers had all briefly served as Deputy U.S. Marshals in Oklahoma and Kansas, shortly thereafter they had become notorious for cattle rustling and a variety of robberies, including several train robberies in 1891 and 1892. In addition to the Dalton Brothers, most other gang member got together while working as cowboys on Oscar Halsell's HX Bar Ranch in Oklahoma. Known to many Coffeyville citizens, the Dalton's wore disguises, but as they approached the banks they were recognized by some citizens and the alarm was spread. Emmett and Bob entered the First National Bank while Grat and the other two entered the Condon Bank With $21,000 in a grain sack, Emmett and Bob left the First National Bank but were immediately fired upon by several citizens. They headed out the back door into "Death Alley." In the deadly fusillade of gunfire four of the gang were killed, the City Marshall and 3 citizens were killed, and 3 other citizens, as well as Emmett Dalton, were wounded. Cabinet Cards. Photographs/Mounts as follows: Bob ... 3.875" x 5.5"/4" x 6;" Grat ... 3.875" x 4.875"/4.375" x 6.5;" Dick ... 4" x 5.625"/4.25" x 6.5;" Bill ... 4" x 5.25"/4.25" x 6.5;" and Emmett ... 4" x 5.5:/4.24" x 6.5." All but Bob Dalton issued by Tackitt, Coffeyville, Kansas. Three have stamp on verso stating: WARNING! Copyright is applied for on these photos. - - - Mrs. C. Tackett. All five rare original photographs offered as a set. Emmett Dalton, the "Sole Survivor" of the gang received a severe rifle shot wound to his arm, but despite the opportunity to escape, he returned into heavy gunfire to help Bob, when he received 21 buckshot from a citizen's double-barreled shotgun. Badly wounded, Emmett survived, refusing doctor's recommendations to amputate his arm. He received a life sentence in the Kansas State Penitentiary. In 1907 Emmett was pardoned by a petition from citizens of Coffeyville. He married his longtime sweetheart, moved to California, and in 1931 published When The Dalton's Rode, which subsequently became a movie. Emmett died in Los Angeles in 1937.

Notice: Written Permission Must Be Obtained From Either …
by Russell Gulch Mining Co