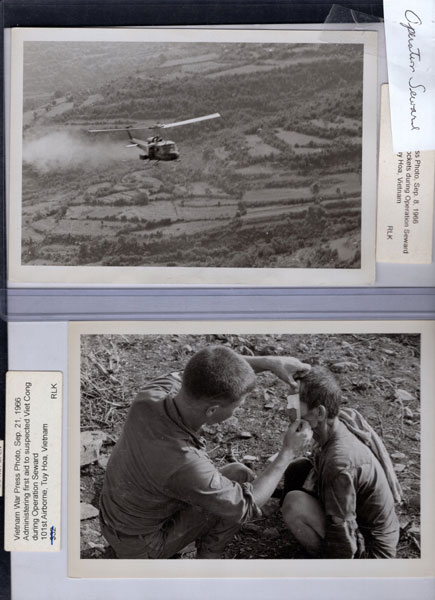 ("Screaming Eagles" - Vietnam) THE 101st AIRBORNE DIVISION ("Screaming Eagles") was a specialized modular light infantry division of the U.S. Army that trained for air assault operations. Organized November 2, 1918 at Camp Shelby, Mississippi, the 101st Division has fought through every major conflict including almost 7 years in combat in South Vietnam. During Vietnam the 101st Airborne Division participated in 15 campaigns including the fight for Ap Bia Mountain or the Battle of Hamburger Hill May10 - 20, 1969. The first 4,000 paratroopers arrived in Vietnam in 1965, landing at Cam Ranh Bay. They made a demonstration jump immediately after arriving, observed by Gen. William Westmoreland, a former commander of the division and outgoing Ambassador (formerly General) Maxwell. While in Viet Nam the "Screaming Eagles" were known as the "Nomads of Vietnam" as according to Capt. Jim Page, division historian, "they literally fought in every area of Vietnam from the (demilitarized zone) up north all the way down to the central highlands." The division suffered almost 20,000 deaths or wounded in action in Vietnam, more than twice as many as the 9,328 casualties it suffered in World War II. (Today In Aviation) In total 8.7 million Americans served on active duty during the Vietnam period (Nov. 1, 1958 - May 15, 1975). In 2019 we lose approximately 500 Vietnam vets everyday. As of December 21, 2018 according to the Defense POW/MIA Accounting Agency, the number of U.S. Military and Civilian personal who served in the Vietnam War and still unaccounted for is 1592. This collection of 90 U.S. Army photographs provides a narrative of events occurring during several important operations, including Hawthorne, John Paul Jones, Seward, Pickett and Malheur. Taken by American Army photographers, some of whom are identified on the photographs along with their handwritten notes on the back, these images illustrate America's involvement in one of the most controversial wars in history. Many are undated although of the same time period, but those that are begin in June 1966 and extend through February 1967. Sizes range from 5 x 7 and 8 x 10. Operation Hawthorne took place near the Village of Toumorong, Kon Tum Province, South Vietnam from June 2 - 21, 1966. Photographs include that of a medic attending to the wounded, artillery support after a Viet Cong initiated an attack and refugees getting their first bath in weeks. Operation John Paul Jones occurred from July 21 - September 5, 1966, in Tuy Hoa, Vietnam. In this battle, Brig. Gen. Willard Pearson sought to use semi-guerilla tactics to locate Viet Cong and the People's Army of Vietnam and then bring firepower to bear on the enemy. Photographs illustrate 2nd LT Lane McNitt discussing an ambush, Capt. Ozonin examining PFC William Mitchell, a helicopter evacuation of a Vietnamese soldier and the probing for a Viet Cong land mine. Operation Seward was conducted by the 1st Brigade, 101st Airborne Division in Phu Yen Province from September 5 - 25, 1966.At one point, four Viet Cong were killed and three taken prisoner. The prisoners revealed to the Americans that their unit was planning to attack the hamlet of Tu Bong. The 2nd Battalion, 502nd Infantry Regiment was deployed to forestall the attack. On September 17, under cover of heavy rain, more than 100 Viet Cong attacked the night defensive position of Company B/327th, killing 10 American soldiers, including the Company commander. Photographs include a helicopter firing rockets, a soldier administering first aid to a Viet Cong, rice paddies with buffalo wading in the water, ruins of a Catholic Church next to huts, machine gunners in position of firing and a defensive military position on the perimeter. Operation Pickett (Dec. 6, 1966 - Jan. 19, 1967) photographs include that of a cannoneer firing a 105mm Howitzer round, a 157-ton Viet Cong rice cache captured by paratroopers, former Viet Cong prisoners being escorted to a landing zone by paratroopers. They had been liberated from a Viet Cong prison camp. Other photographs include a captured North Vietnamese Army soldier broadcasting a surrender appeal message to his comrades after a battle during Operation Geronimo, which lasted from October 31 - December 4, 1966, and was planned to harass the battle-damaged People's Army of Vietnam before the start of the monsoon season. Thirty-eight Viet Cong were killed and 26 weapons captured in Operation Farragut (1967), a search and destroy mission, near Phan Rang. One photograph illustrates Lt. Col. Donald Rosenblum, 2nd Battalion 327th Airborne Infantry and his staff surrounded by some of the material. Another photograph illustrates captured material and documents being examined by paratroopers of the Intelligence section. A paratrooper of the 101st is moving in on a former enemy position during Operation Malheur II in one photograph. Soldiers had taken fire from the hut, but the enemy fled when assaulted. Operation Malheur 1 and 2 were a series of search and destroy operations, extending from May 11, 1967 - June 8, 1967. The operation consisted of small skirmishes but were successful in disrupting the Viet Cong. When the operation concluded, 869 Viet Cong and 81 American soldiers were killed and 314 weapons captured. Other photographs include captured weapons, Americans and with South Vietnamese soldiers, the American Army magistrate, Capt. Gerald C. Coleman, traveling to his next case, a Huey with a "Hog" Rocket System making a gun run on the Viet Cong Village where two gunships took several 30 caliber hits, an American hideout, the dismantling of an old Vietnamese Army steel structure for rebuilding at the Montagnard Hospital. Training exercises are illustrated in photographs of explosives and a flame thrower. The Bronze Star is presented to Brig. Gen. Willard Pearson, Commanding General of the 1st Brigade, for heroism in one photograph and Brig. Gen. S.H. Matheson is visiting the troops at Phan Rang in another. Matheson assumed command of the "Screaming Eagles." Each photograph (several duplicates) is contained in flexible but solid plastic for protection but can be easily removed. Overall, they are in excellent condition and represent a moving narrative of America's involvement in the Vietnam War.

Letter From The Secretary Of The Interior, Submitting …
J. THOMPSON

History And Review Of The Copper, Iron, Silver, …
A. P. SWINEFORD