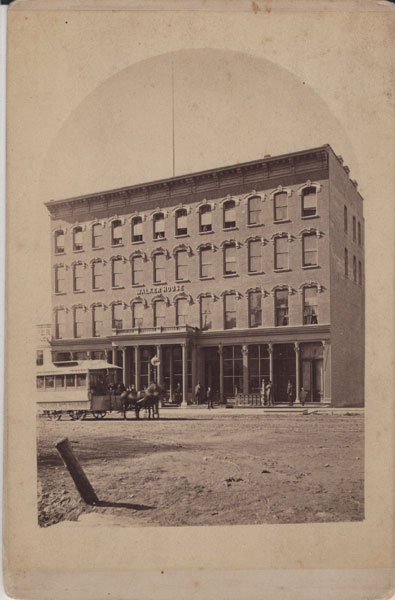 Photograph Of The Walker House, Salt Lake City, Utah, Circa 1875

Cabinet-sized vintage photograph of the Walker House soon after construction with a horse-drawn “Salt Lake City Railroad” streetcar in front of the main entrance. Curved top image mounted on a 4 1/2" x 6 1/2" mount with the easel logo of C. R. Savage / Art Bazar, / Salt Lake City, Utah on the back. The Walker House was built in 1872 on South Main and was torn down shortly after the turn of the 20th century. It had a good reputation; President U.S. Grant stayed there during his 1875 tour of the West. Photographer Charles Roscoe Savage, a Mormon, came to Salt Lake City in 1860. By 1862 he had a partner, George Martin Ottinger, and operated under the name of Savage & Ottinger until the early 1870s. In 1875 Savage built his new gallery, the Art Bazar, which burned in 1883, thereby giving a circa date to this photo. See Palmquist & Kailbourn, Pioneer Photographers of the Far West. Great detail and clarity in the image. Fine.

The Central Railroad Of Iowa, Forming, With Its …
Charles C. Gilman [President]