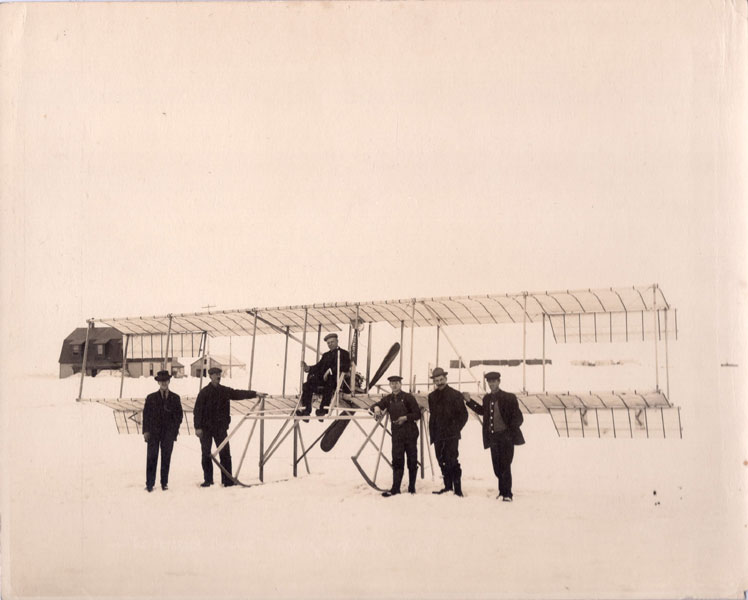 Photograph Of The Peterson Bi-Plane, Nome, Alaska, May, 1911

One silver gelatin photo. 7 3/4" x 9 3/4" printed on thick matte finish photo stock, with text below the image beneath the two men on the left hand side as you face the picture. The words below say Peterson Bi-Plane and are very faint (in my case non-existent, as I see no printing at all) from being included in the snowy foreground and the passage of time. A fantastic photograph of this very early Henry Farman III type bi-plane fitted with skis setting in the snow with pilot seated, and ground crew on snowy landscape standing in front of the craft with Nome warehouse and town in the background. A remarkable and historic photograph documenting the attempted first flight and first aviation disaster in Alaska. Peterson (fl. 1900-1912) was a musical instructor who decided to build his own version of a Farman III type bi-plane from plans he purchased, and with skis as landing gear. The aircraft was an equal-span pusher bi-plane, ailerons on upper and lower wings, but Peterson chose to experiment and leave off the forward elevator on booms as the original designer demanded. He made his first flight attempt in May, 1911 as documented by this photograph, but was unsuccessful, due to his own lack of experience, and a novice understanding of aerodynamics. The plane was later sold. The Farman III type bi-plane was originally designed and built by Henry Farman in 1909, and incorporated design elements both from the Voisin Brothers bi-planes, as well as the Wright Bi-plane following the flying demonstrations by Wilbur Wright in August, 1908. The first successful flight in Alaska took place in 1913 during an aerial exhibition in Fairbanks on the 4th of July by James Martin. (See: Gregory P. Liefer, Broken Wings: Aviation Disasters in Alaska (2014), p. 1). Minor residue from old tape mountings on verso of image, one corner with very slight tiny tear, still a very good image with strong contrast.

Recollections Of A Pioneer Lawyer
by Othman A. Abbott