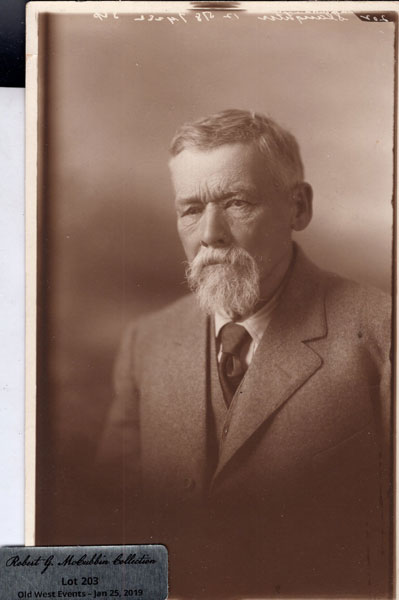 First edition. 7 7/8" x 5" photograph of John H. Slaughter, pioneer cattleman, Civil War soldier, Texas Ranger, Indian Campaign army scout, Sheriff of Tombstone's Cochise County, Arizona legislator, and founder of Douglas, Arizona. The Album of Gunfighters says : "John H. Slaughter was born in Louisiana, October 2, 1841, served in the Confederate Army, and became a Texas Ranger. Later he turned his attention to ranching. In 1877 he settled in Cochise County, Arizona, and founded the San Bernardino Ranch, near where the present city of Douglas is now located. He served four years as sheriff of Cochise County, and was one of the best officers that county ever had. His life is an amazing chapter of many deeds of heroism in dangerous encounters with outlaws and rustlers of that early period, for he was ever ready 'with one hand on a six-shooter, and the law in the other.' He died of apoplexy February 15, 1922, at his ranch home, aged 80 years." Also included with the photograph is a 4 1/2" x 8 1/2" document, "Tombstone, A. T. May 27, 1888--, on letterhead of J. H. Slaughter, Sheriff. Signed by J. H. Slaughter, Sheriff and his deputy, served a subpoena on Henry Jenkins. A second document is included and is 2 7/8" x 6 7/8" check, The Bank of Bisbee / crossed out and written Bank of Douglas, signed J. H. Slaughter, Jun 12, 1904." All three items are in near fine to fine condition. Provenance: Robert G. McCubbin Collection.

On, Arizona! A Readers' Survey Of The Grand …
by Marcia And Jeanette Daane Melton

Where The Rockies Ride Herd
by Stephen Payne