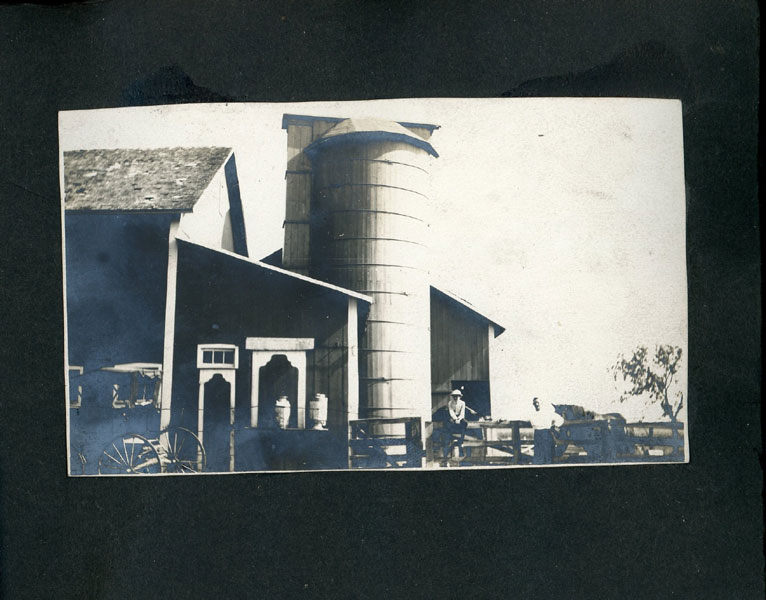 Other works by FRED J HELDEBRANDT

6" x 7 1/2" faux leather album containing 50 photographs (mostly silver gelatin as well as two cyanotypes), most measuring approximately 3 1/2" x 5 1/2," and all being glued to album pages which has caused some to become a bit wavy. Six of the photographs are captioned. The album is identified as the “Property of Fred J Hildebrand," hand-written on the inside of front cover. The photographs document an Ohio farm family’s life and includes images of African-American roustabouts erecting tents for a Barnum & Bailey Circus as well as images of Harry Atwood’s hydroplane rides over Lake Erie. Public records show Hildebrandt as living in northwest Ohio in the vicinity of Toledo, and his photographs provide a vivid view of early 20th century Midwestern farm life. Images include farmhouses, barns, horse-drawn wagons and buggies, Auglaiz Power Dam, automobiles, steam tractors, cattle, ducks, horses, chicken feeding, cutting wood with a large crosscut saw, cornfields, gardens, a woodpile, family members, etc. Of special interest are three photos of a Barnum and Bailey circus visit ... one of an elephant and two of African-American roustabouts driving tent stakes. More importantly are three photographs documenting a barnstorming visit of famed early aviator Harry Atwood offering hydroplane rides in his "aero-yacht" over Lake Erie. A wonderful record of early 20th century Midwestern farm-life made more desirable by the inclusion of important early aviation and African-American circus images. Although they are generally clean, a few show some light soiling and edge wear. It appears that some may have been relocated within the album. The album has some light wear; its pages are all attached, but some appear to have been tipped in.