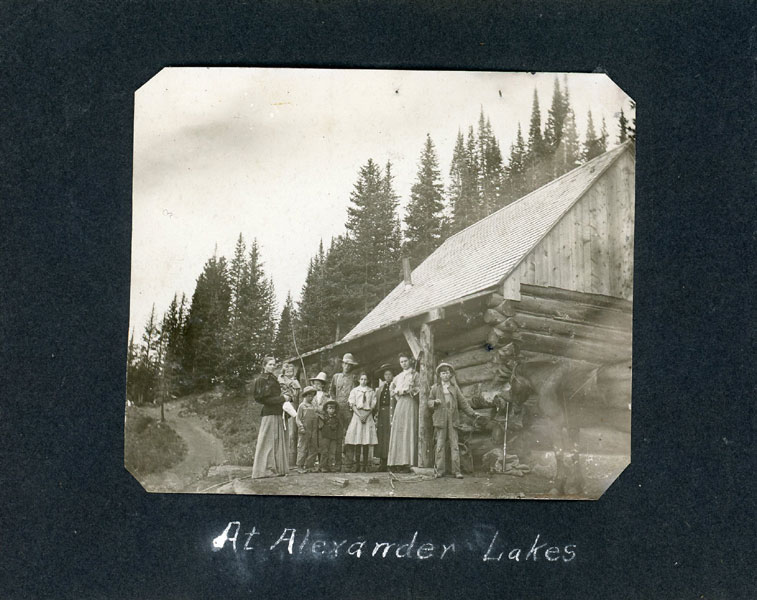 5 1/2" x 7 1/2" in contemporary black cloth and housing 53 original photographs tipped into corners. Photos vary in size with the most common measuring 4 1/4" x 3 3/4." Every photograph with a caption in white underneath. A handful of photos are oval shaped and a few are unevenly cut. Opposite the first leaf is a piece of paper reading: "To Miss Flora Burritt from Hiram, August 14, 1911." The first leaf bears an image of a man seated on some rocks and captioned "Rim Rock, Grand Mesa." I think we can safely presume this to be Hiram. There is record of Hiram and Flora Burritt being siblings. The photographs show many localities but it is apparent that home was Delta, Colorado. Delta was built as a trading post for the Ute people and early settlers. Fort Uncompahgre was built in 1828. The town was named because of its location on the delta where the Uncompahgre River flows into the Gunnison River. The town was incorporated in 1882. It still exists and has a population of about 10,000. Some of the more interesting photographs include: "Sam Ritter" showing a fur-clad postman braving the wilds of a Colorado winter ... the horse-drawn mail wagon (U. S. Mail R. F. D. No. 1) is in front and Sam Ritter, the postman, is dressed in a huge fur coat against the backdrop of windswept mountains. It appears that his wagon may be stuck in the snow; "Bound for Ouray" which shows a group of men riding in an open train car; two photographs of Field Day" at Eckert (track and field events); the First National Bank of Delta; "Tongue Creek School, Mr. Wright teacher" showing a one room school with all the students posing on the front porch of the school; Lincoln School; the First M.E. Church, Delta; P.Y. Gunsolis' Residence in Delta; J. B. Ratchin's Farmhouse with his family standing outside on the porch; Opening the Gunnison Tunnel with President Taft present, which took place on September 23rd, 1909; The Ponitier Cabin (quite low, old and primitive looking); a wrestling match at the Delta County Fair; two young men boxing with gloves on. There are many photographs of whole families posing on the front porch of their cabins. One of the most outstanding examples is entitled, "At Alexander Lakes," showing a fine log cabin with pines in the background and with 10 family members posing in front and "At Mr. Meddock's" depicting a family of 7. Other great images include Taft's cabin, Pontier's cabin, Berninger's farmland and E. E. Bull's Orchard with men standing on a flat-bed wagon and picking fruit from the trees. One photo has been torn in half from the leaf but has been re-glued. Most photos are starting to detach from album leaves. Photos have nice clarity and composition. Black cloth album covers have moderate wear to edges and corners, and the text block is almost detached from the covers. Overall good. A very nice view into turn of the century rural Colorado.