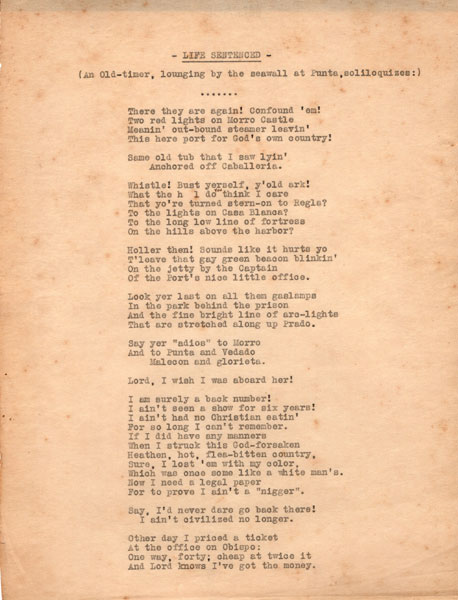 10 1/4" x 12" in black cloth covered flexible wrappers. 27 black and white silver print photographs, each approximately 8" x 10," mounted to rectos only of first 27 leaves. Several additional leaves blank. Loose glassine leaves with typed photo descriptions laid in above each print. A 2-page typed poem entitled "Life Sentenced - (An Old-timer, lounging by the seawall at Punta, Soliloquizes:)" laid-in at front of album. This poem was apparently penned by Irene [Aloha] Wright, an American historian who spent time in Havana. From 1904–1905, she was a writer for the Havana Post in Havana, Cuba. The same year that she left the Post, she became a city editor of the Havana Telegraph, a post she would hold for three years. The next year, she purchased the Cuban Magazine, which she would own until 1914. The photograph album highlights include a striking view of the raising of the USS Maine and one of its sinking (each having taken place in about 1911), an additional shipwreck, numerous street and cultural scenes, etc. Each photograph is titled by the album's compiler on a single glassine sheet guard laid over the print. Captions are often clever and light. They include: 1. Morro on a dark and stormy day; 2. The Malecon on a peaceful morning of a hot August day; 3. The picturesque wreck at the water front; 4. The dead line – Cabanas; 5. The entrance to the Harbor (Don’t you LOVE to see those boats come in!); 6. The land of the royal palm; 7. The Country Club of Havana; 8. Cuarteles Street (right near Pena Pobre) / The Church of the Angels; 9. The Cathedral; 10. The elephant hide trees on the road to Guines; 11. In Vedado / Where the moonlight shines so sweetly; 12. To the night / to the palms / to the moonlight; 13. On the way to market in Matanzas; 14. Apatio; 15. The raising of the “Maine” – The coffer dam – Havana Harbor; 16. The burial of the “Maine;” 17. A field of perfectly good tobacco; 18. Tobacco growing under nets; 19. Asugar mill; 20. Pineapples; 21. Bananas; 22. The peaceful tree in Santiago de Cuba. Some tree!; 23. Country Club of Havana (pronounced Coontrie Cloob) / para los ricos; 24. The feathery bamboo; 25. A colonnade; 26. La Playa de Marianao – Where we’ve had our BEST TIMES / (seven strokes underwater); 27. Plaza Hotel roof, Havana. / (where I found out what cocktails were good for – to keep me from getting blue). Outer cloth lightly faded with a few nicks at rear. Some mild interior foxing, most pronounced to loose overlays and to poem. Prints with some infrequent and light staining from adhesive at versos. Very good. A lovely album of circa-1911 views of Cuba.

Index & Reference Guide For The Copper Mining …
by Lee A. Miller