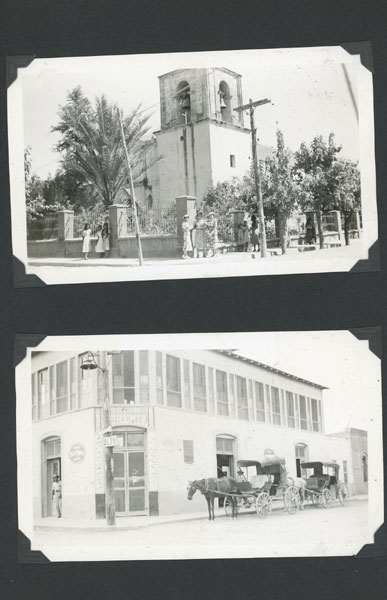 Photograph Album Containing Over 370 Images Of An American Expatriate Community Living In Coahuila, Mexico And Working In Local Industry During The Great Depression, 1936-1937

Original quarto, black leatherette covered album, manuscript captions on album leaves, photographs in corner mounts, 372 original images, plus approximately two dozen loose or under-mounted duplicated and twenty commercial prints, the preponderance measuring approximately 2 1/2" x 2 1/2," some larger. A fascinating album of southwestern photographs, comprising nearly 375 original images of life for American families working at commercial coal and zinc mining operations in the Mexican border state of Coahuila during the Great Depression. The several families depicted in this album lived and worked near a cluster of towns approximately eighty miles southwest of Piedras Negras and Eagle Pass that included Rosita, Cloete, Aguhta, and Sabinas. This region of Coahuila is still known for its coal production today. The images present show many views of the towns, including street scenes, processing plants and laboratories, mines, and views of the surrounding area during 1936 and 1937. Much of the album consists of American families living what appears to be a fairly isolated life in a relatively rural area of the state. Several scenes in the first series of images show gatherings at the Rosita Country Club, which appears to be a small brick house where residents cooked in rudimentary barbeque pits, played golf on a very makeshift course. Other images show small parades, horse races, action at the new community swimming pool, a bull fight, and numerous outings into the surrounding regions, with many scenes of the Sabinas and Alamo Rivers, with small social gatherings and picnics at town river crossings and vistas. Most interesting are the scenes of the Mexican towns, ranches, and workplaces where this small but apparently energetic community spent their lives at the height of the Depression. There are many images of Rosita in particular, the houses and industrial plants there, previously extant and newly constructed, new coke works, zinc processing laboratories, and a brick factory. Scattered images show scenes of local Mexican work and life. A series of approximately seventy-five photographs in the middle of the album depict a road trip across the West taken by the photographer and his family, which began in Del Rio, and passed through El Paso, the Carlsbad Caverns, the Coolidge Dam, and Southern California, before ending in San Francisco and the National Parks of central California. Although the photographer is unidentified by the captions, one presumes it to be the man whose self-portrait is the first image in the album, and beyond the photographer, many families and individuals are identified in the captions. Overall, a thorough and engaging representation of expatriate community and industrial work on the Mexican side of the Rio Grande during the Great Depression. Some light fading or yellowing to several images, but photos clear and crisp, overall in very good+ condition.

Why Have It Simple
by Maggie Day Trigg