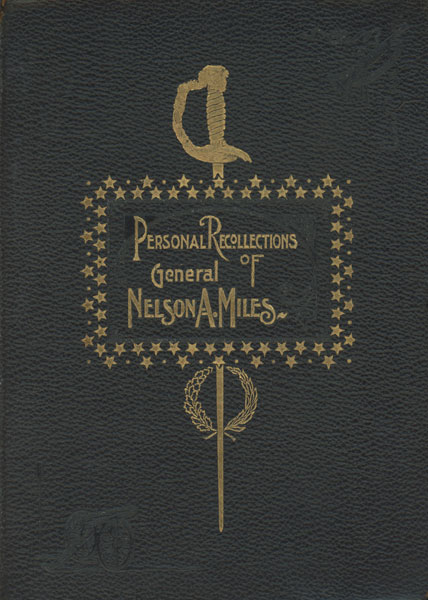 Personal Recollections And Observations Of General Nelson A. Miles Embracing A Brief View Of The Civil War Or From New England To The Golden Gate And The Story Of His Indian Campaigns With Comments On The Exploration, Development And Progress Of Our Great Western Empire

Other works by GENERAL NELSON A. MILES

First Edition, Rare DELUXE Issue specially bound, and with "Major-General" to the portrait frontispiece. "Copiously Illustrated with Graphic Pictures by Frederic Remington and Other Eminent Artists". The illustrations are both on plates and throughout the text and include some group portrait photographs and the photographic portrait of General Miles as frontispiece. 4to, publisher's best and deluxe binding of gilt and blind decorated pebbled brown cloth fashioned to look like full morocco, the upper cover with gilt lettering and stars with a central gilt sword and victorious laurel wreath, two opposing corners with a blind embossed trumpet and a cannon, the spine gilt lettered and decorated with cannon and epaulettes and gilt tooled flat bands, gilt floral vine endpapers and a.e.g. [8], 591 pp. A superb copy of the best issue, the very handsome binding with only the most trivial signs of wear, sound and sturdy with the text appearing to be completely unused. FIRST EDITION OF THIS IMPORTANT FIRST HAND ACCOUNT AND A TRULY SUPERB COPY OF THIS RARE VERY HANDSOMELY BOUND DELUXE PRESENTATION BINDING. No information is provided as to the number of these bindings that were issued. We suspect no more than 10 copies, After his service in the Civil War General Miles played a highly important role in the United States Army's Western activities. He was involved with nearly all of the major campaigns against the Indians of the Great Plains, including the Sioux and campaigns against Sitting Bill. These recollections are nearly entirely of those Western activities; the Civil War being discussed in only two of the books forty-four chapters. The work includes a discussion of the Pre-Colombian period, as well as chapters on Indian character, law, religion, and eloquence. Among the extensive number of topics discussed can be found writings on Western game animals, the campaigns in Texas and New Mexico, the Kiowas, Comanches and Sioux, the disastrous "last stand" of General Custer, the effects of said massacre, the Cheyennes, the Ogallalas, Sitting Bull, Utah and the Mormons, Alaska, Arizona, the Apache of the Southwest, the move into California and the state of Western transportation. The work is greatly augmented by the fine Western artwork of Frederic Remington, as well as others. The illustrations are every bit as copious as the title-page promises.

Letter From The Secretary Of War, Transmitting A …
GEORGE W McCRARY