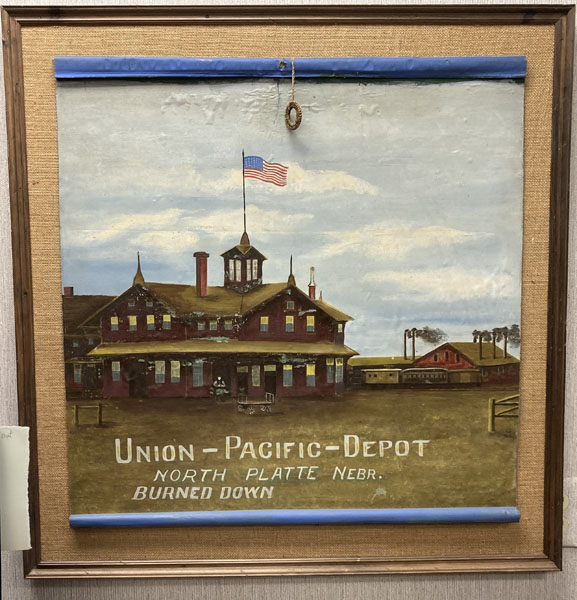 28" x 28" full color painting of the Union Pacific Railroad's Bailey Yard in North Platte, Nebraska. It was named for the president of the Union Pacific, Edd H. Bailey. It is the largest railroad classification yard in the world as it is 8 miles long and 2 miles wide. The yard covers 2800 acres and within it are 315 miles of track. Today, every 24 hours Bailey Yard handles 10,000 railroad cars, 3,000 of which are sorted in either the eastward or westward yards, nicknamed "hump" yards with 120 - 140 trains a day that pass through Bailey Yard. The first train to enter North Platte was on December 3, 1866. By January 2, 1867, the main line of operations officially commenced in North Platte. From 1873 to 1913 "Buffalo Bill" Cody lived and organized his Wild West Show from his ranch north of the rail yard, and transported his show via rail and wagon. In 1897, E. H. Harriman purchased the Union Pacific at an auction held in Omaha, Nebraska. The construction of the second main line commenced through North Platte in 1910. This art is painted on a 28" x 28" linen window shade and depicts the Bailey Yard Railroad Depot and hotel, both of which burned on November 17, 1915. An important painting of the depot and hotel along with train cars and an iron worker's factory building prior to that fire. Minor flaking and an old small repair to the linen else a fine example of both window shade art and a depiction of the historically important Union Pacific Rail Road Depot at North Platte, Nebraska.