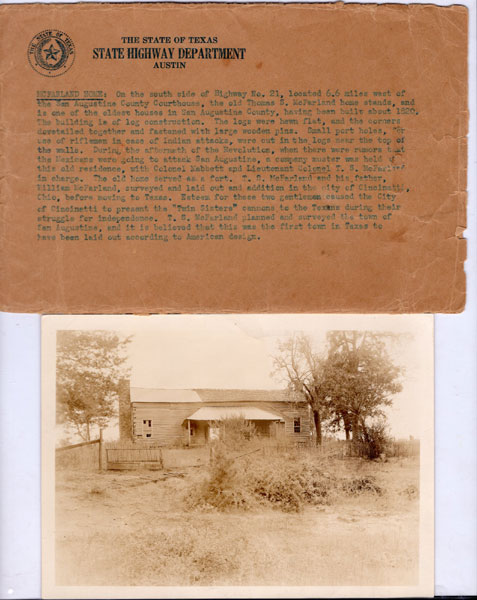 5" x 7" sepia-toned photograph of the home of Thomas S. McFarland. Also include 5 1/2" x 8 1.4" envelope. Front of envelope shows the 1845 Texas State Seal with the words, "The State of Texas/State Highway Department/Austin written beside the seal. Below the seal is typed MCFARLAND HOME: and this is followed with detailed information about the home's construction to include small port holes for use of riflemen, etc. Further information explains that this home was used as a fort during the Revolution. Finally, information about Thomas McFarland's accomplishments is offered. On reverse side of envelope is written "To Eugene & Etna, from mother. This was given me by Wm (?) Seale. "Surveyor Thomas McFarland was selected to survey the town site and sell the lots. It is believed that San Augustine was the first town in Texas laid out on the purely American plan - - 356 lots on 4 city blocks with two lots in the center for a courthouse square and all streets 40 feet wide. From these humble beginnings sprang the earliest and oldest American town of Texas, often called the "Eastern Gateway to Texas," a place of culture, religion, education, and immense political and economic influence. Historian and author William Seale wrote: 'Architecturally the San Augustinians built an environment eminently superior to any town in Texas – with the exception of Galveston — prior even to the Civil War.'" In addition to being a surveyor, McFarland also was a soldier and statesman; Aide-de-camp to Major Bullock in the Battle of Nacogdoches, 1832; soldier in the Texan Army, 1836; member of the Congress of the Republic of Texas; and Chief Justice, San Augustine County. Photograph is clean and clear; envelope is worn at edges. Very interesting item.

Across The Continent. Scenic Line Of The World
Denver & Rio Grande Railway

Soda For The Sourdoughs
by Fern K. Nelson