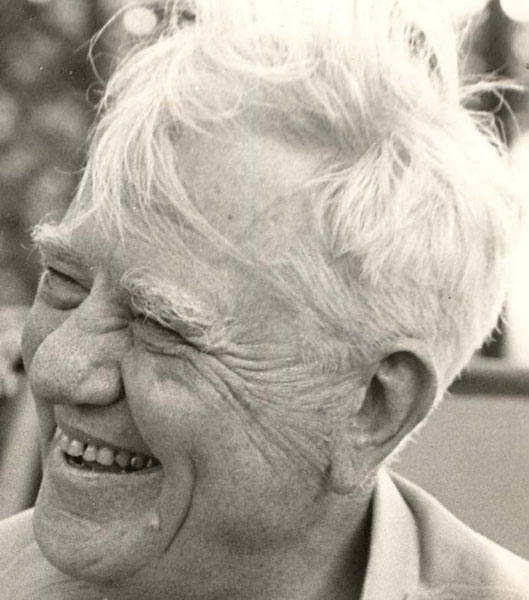 Original gelatin silver image. Pencil notation on the verso reads "circa 1952, near Austin, Texas." Also stamped on the back is "Photograph by Russell Lee, 3110 West Ave., Austin 5, Texas."The photograph was possibly taken at Joe Small's Barbeque in Austin. The same image in a cropped format, appears on the rear cover of the TEXAS OBSERVER of July 24, 1964. This issue is devoted to commemorating the life of J. Frank Dobie and is filled with recollections and tributes. The photograph exhibits minor creasing at the corners and three tiny chips along one side. Neither of these minor flaws impact Dobie's image. This item is from the estate of Edgar Kincaid and has an inked notation on the back of the photograph to "Return to Edgar Kincaid." Kincaid was the nephew of Bertha and Frank, who had no children. Russell Lee began his career as a professional photographer in 1935 selling his images to magazines. After a successful career with the Farm Security Administration, he remained active in documentary photography chronicling both rural and urban life. In 1947, Lee and his second wife moved to Austin where he became the University of Texas first instructor in photography. With this move his focus shifted more to topics dealing with Texas and the Southwest. He died in Austin on August 28, 1986. This is an important image of an iconic Texan taken by a renowned American photographer and photojournalist.

Beads And Beadwork Of The American Indians. A …
by William C. Orchard

The West Of Wild Bill Hickok.
by Joseph G. Rosa