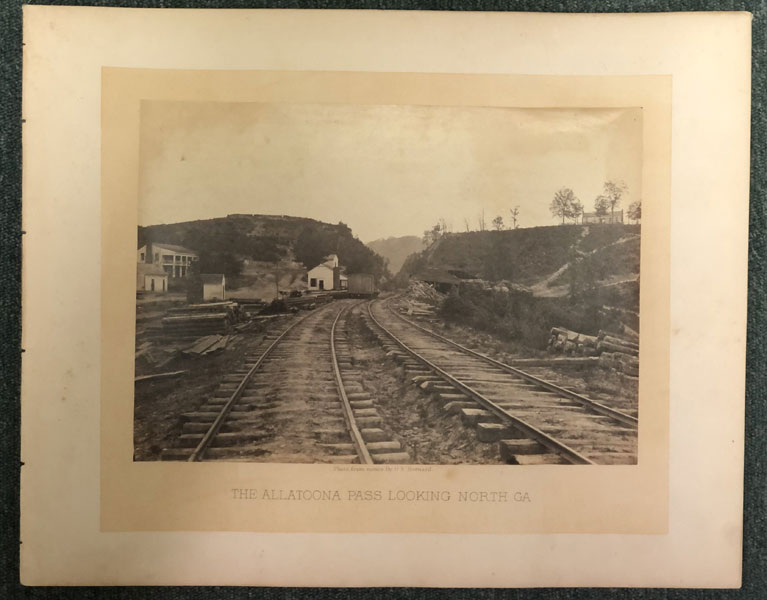 Original two-tone gilt-edged thin card mount, 16 1/8" x 20," with plate title and photographer's credit. This image comes from George N. Barnard's album titled Photographic Views of Sherman's Campaign, embracing scenes of the occupation of Nashville, the great battles around Chattanooga and Lookout Mountain, the campaign of Atlanta, March to the Sea, and the Great Raid through the Carolinas (1866). This album, together with Alexander Gardner's Photographic Sketchbook of the Civil War (1866) are the two greatest photographic monuments of the Civil War. Between them, they contain some of the most famous images of the War. The present image shows the Western and Atlantic Railroad pass through the Allatoona Mountain range. Allatoona was a small town, consisting of Clayton House (the home to the left in the photograph) and the depot, that had become a central part of the Union supply line. It was therefore the first goal of Confederate General Hood's campaign to re-take northern Georgia and then, Nashville. Unfortunately for Hood and his cause, Sherman anticipated the attack and reinforced his defenses. The battle took place on October 5, 1864. After some initial success, the Confederates were successfully repulsed and forced to retire. The casualties in proportion to the number of men involved were quite high: more than 1,400 of somewhat more than 5,000 engaged. A fine copy of a stunning image from Barnard's 'Photographic Views of Sherman's Campaign', an album which is one of the two greatest photographic monuments to the Civil War and 'a landmark in the history of photography' (Keith F. Davis). A contemporary reviewer wrote of this image and its companions: 'These photographs... surpass any other photographic views which have been produced in this country - whether relating to the war or otherwise' ('Harper's Weekly', 8 December, 1866, p.771) Cf. De Renne p.1317; cf. Howes B150, "b."; cf. Sabin 3462; cf. Taft Photography and the American Scene pp.232 & 486. See also: George N. Barnard Photographic Views of Sherman's Campaign... with a new preface by Beaumont Newhall New York: 1977 Keith F. Davis. George N. Barnard Photographer of Sherman's Campaign Kansas City, Miss.: 1990.