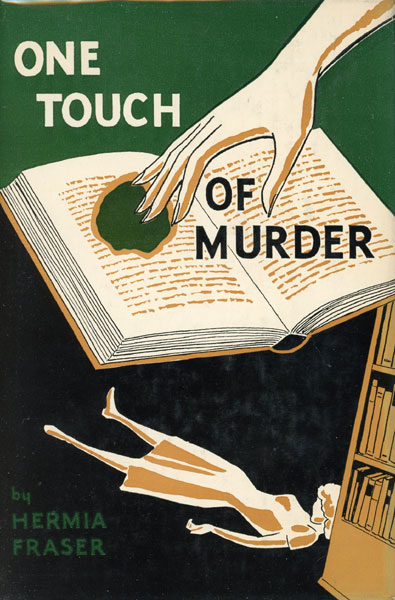 One Touch Of Murder

First edition. Author's first and only mystery novel. Fine, bright copy in a beautiful and bright dust jacket with only a hint of wear to the foot of spine. The public library was the quietest place in the little town of Caselton. So it was shocking to everyone when the middle-aged spinster, Isabelle Waldron was found dead in the stacks, If Sue Sloan, who worked in a hat shop and lived in Mrs. Bromley's boarding house, hadn't been on the trail of the same book for which Miss Waldron was looking, she wouldn't have been the one to find the dead woman and, by that fact, have become a murder suspect. Before the mystery is solved Sue learns a great deal about rare poisons and secret motives. Hermia Fraser (1903-1977) was a noted and prolific British Columbia Canadian artist and teacher whose poetry, artwork, and fiction writing spanned decades. She lived in Portland, OR for a year in the 1950’s while she researched location and background for her historical novel, Tall Brigade: Life of Tom McKay of Hudson’s Bay Company.

Mark Kilby And The Secret Syndicate.
by Robert Caine Frazer

What's In A Name?
by Thomas H. Cook