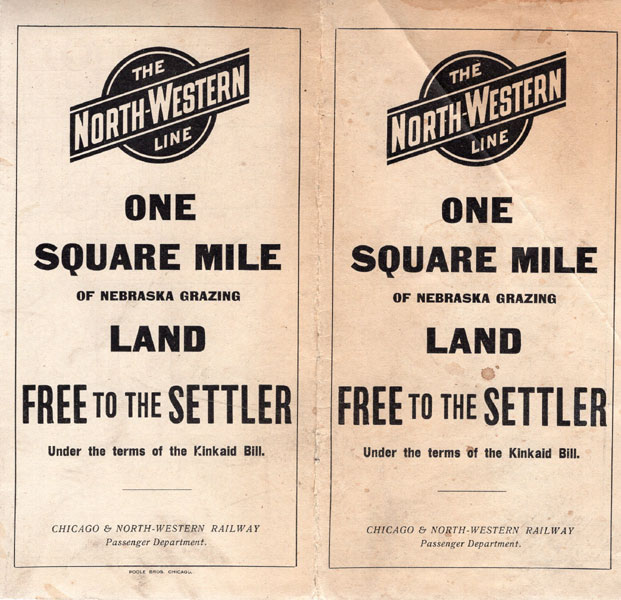 One Square Mile Of Nebraska Grazing Land. Free To The Settler Under The Terms Of The Kinkaid Bill

First edition. 15" x 24" sheet folded to 24 panels. Illustrations. Maps. The Homestead Act of 1862 allowed any qualified individual to claim up to 160 acres of free public land from the U.S. government for the purposes of settlement and cultivation. Many seeking homes and farms jumped at the chance to acquire land under the Act, and unfortunately many were also misled regarding the quality of much of the land the government made available to homesteaders. Land speculators, railroad companies, and even the government itself produced advertisements promising “the land of milk and honey” and soil of “a rich, black, loam.” Nebraska was billed as the “garden state of the West.” Many prospective homesteaders’ dreams were crushed upon arriving in the West and finding land of such poor quality that farming it was nearly impossible. In an attempt to give settlers in his state a better chance at success, Republican Congressional Representative Moses P. Kinkaid of Nebraska proposed a new bill in 1904. The Kinkaid Act allowed settlers in 37 counties of western Nebraska ... known as the “Sandhills” ... to claim up to 640 acres rather than the standard 160. President Theodore Roosevelt signed the Kinkaid Act into law on April 28, 1904, and “Kinkaiders” began taking up claims in western Nebraska soon after. However, even with a square mile of land, farming in the "Sandhills" was very difficult. Ranching with only 640 acres was nearly impossible as well. The Kinkaid Act opened up millions of acres to agriculture where farming wasn’t likely to succeed, and it prevented those lands from being effectively ranched by handing them out in parcels much too small. While the Kinkaid Act stimulated an immediate burst in economic activity for the region, this was mostly temporary. Because of the insufficient plots for effective ranching, many Kinkaid sold out to large ranchers. This brochure, produced for the Chicago & North-Western Railway, offers 12 panels touting the wonders of the lands in northwest Nebraska, the benefits to homeseekers and ranchers, the opportunities for business, etc. The pamphlet states, that the purpose of the Kinkaid Act, "is to enable the homesteader to use his land profitably for grazing purposes. There are large quantities of unallotted public lands in Nebraska, the Chicago & North-Western Railway passing directly through such of these lands as are situated in the northern part of the state, providing facilities for the shipment of stock and grain to market, and for the transportation of passengers on fast through trains to Omaha, Sioux City, Des Moines, St. Paul, Minneapolis and Chicago." The brochure goes onto mention towns in the area of the available land that offer stores, banks, schools, and churches as well as being well populated, along with information about what each has to offer. Listing of how many acres available in various towns. Information on who qualifies to take advantage of the Kinkaid Act. Information on the state of Nebraska, the North-Western Line, and the Kinkaid Bill lands of which it states, "Stock raising is the principal industry. There is no finer grazing land in the world than that found on the uplands of Western Nebraska ..." "The dairying interest of Northwestern Nebraska are commanding increased attention also, creameries being established at important points on the railway, and thus creating a convenient market for all cream that can be produced." Opposite 12 panels offers a map showing the lands open to settlement under the Kinkaid Act outlined in red. Map also shows the lines (in red ink) of the Chicago & North-Western Railway from Omaha to the northwestern edge of the state. Inset is a 3 1/2" x 7 1/2" system map showing the lines of the railway from Lake Michigan and west. Light soiling and with light creasing. Reinforcement with cellophane tape to one fold, one 2" split to one fold along with rubbing to folds. A terrific item.

The Care And Handling Of Sails
DEFONTAINE, W. H. [TEXT & SKETCHES BY]

Berkeley - California. A City Of Homes
The Conference Committee Of The Improvement Clubs Of Berkeley California