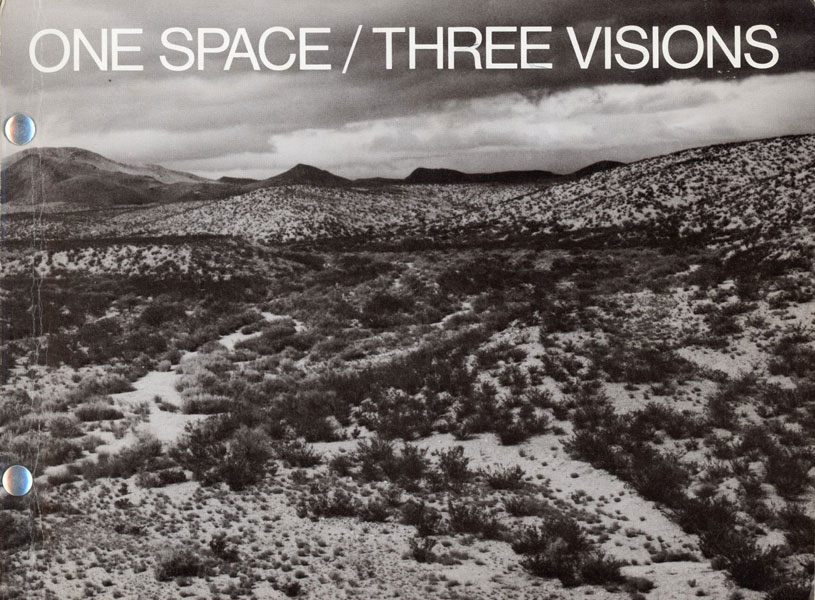 Other works by THE ALBUQUERQUE MUSEUM

First and only edition. Oblong 8vo. Pictorial stiff wrappers, dark brown front and rear endpapers, 338 pp., preface, illustrated. In 1979, The Albuquerque Museum displayed an exhibition titled One Space ... Three Visions in which were displayed arts and crafts of the three cultures of New Mexico ... the Native American, the Hispanic, and the later European-American cultures. It was an extraordinary exhibit and published in a 338-page catalog with photographs of artists and their works. This exhibition documents some of that which continues and, at the same time, that which currently exists ... not intending to extend new knowledge to the informed researcher or culturally aware New Mexico resident. It makes these three New Mexican cultures accessible to the general public by opening a window into those cultures. It creates a sense of the power of New Mexico and its people. Represented with photographic portraits, fifty-one New Mexicans are represented in the exhibit. There is perhaps no place in the world with a more interesting history of craft production than the state of New Mexico. Here, under bright blue skies, in a remarkably varied ad beautiful landscape, three distinct cultures have flourished and, until very recently, maintained their distinctive and separate craft traditions. All have origins as old as the history of mankind, but in New Mexico they make up three successive chronological occupations: the American Indians, who entered the scene some 12,000 years ago, the Hispanos (Spanish Americans) who arrived late in the sixteenth century, and the Anglos, who arrived in numbers toward the end of the nineteenth century. The Native American Craft-Arts in One Space ... Three Visions represents a cultural evolution of nearly 2000 years in Pueblo history. The craft-arts have been sustained by religious forces as well as by an equal percentage of trader, collector and consumer influences. As you view this exhibition and future Indian arts and crafts exhibitions, you will begin to take note of the history, geography, expertise and individual personality embodied in each work of craft-art. Hispanic folk crafts have been produced for years in the rural villages of New Mexico. Today these crafts are recognized as an important artistic contribution to American culture. This ancient craft tradition, transplanted to the New World in the sixteenth and seventeenth centuries by the Spanish conquistadores, bloomed vigorously in the new soil, supported by an incredible wealth of natural resources, principal among which were gold and silver. The Spanish cultural mosaic was enriched with a wealth of native American traditions and a few from the Orient, transported across the Pacific by the Manila Galleon trade. Until ten years ago (the 1960s), the crafts produced in New Mexico were confined primarily to the traditional work of the American Indians and the Hispanic artisans living in this area. The past decade has seen an amazing influx of artist-craftsmen settling throughout New Mexico. Certain artists coming to this area have been directly influenced by the art forms that they found here. The tremendous interest among contemporary potters of New Mexico in "pit-fired" ceramics must be a direct influence of Pueblo Indian pottery. Without the original inspiration of Maria Martinez, it is doubtful that Carl and Mary Witkop would have developed their beautiful coil-built, stone-burnished pit-fired pots. It is questionable that Rick Dillingham would have produced his "broken pots" if he had not been inspired by the reconstructed Indian pottery which he restored for the Maxwell Museum. Fine, bright copy without dust jacket, as issued.

Ned Christie. The Creation Of An Outlaw And …
DEVON A. MIHESUAH

Brandywine Springs. The Rise And Fall Of A …
C.A. WESLAGER