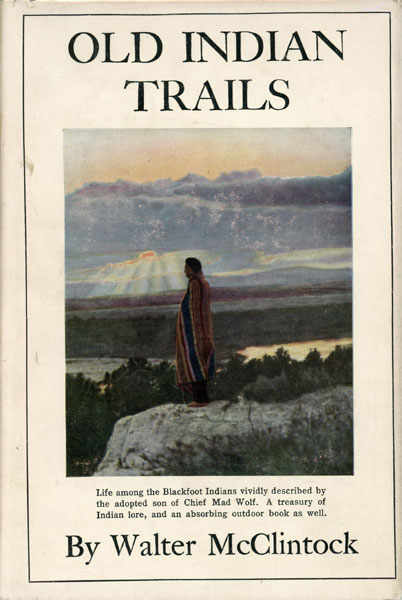 First edition. 8vo. pictorial, decorated cloth, xii, 336 pp., colored frontispiece, preface, illustrated from photographs, plates, portraits, appendix, index. Life among the Blackfoot Indians vividly described by the adopted son of Chief Mad Wolf. A treasury of Indian lore, and an absorbing book as well. The author went on a government expedition in northwestern Montana in 1896. He was guided by William Jackson, who had scouted for Custer, Miles, and was with Reno during his attempted charge down the Little Bighorn valley. McClintock was adopted by the Indians and he relates his experiences while among them to include their ceremonies, ghost stories, Indian songs, and beliefs. Fine, bright copy in dust jacket with a few minor nicks to the extremities. An exceptional copy and the nicest one we have handled in several years.