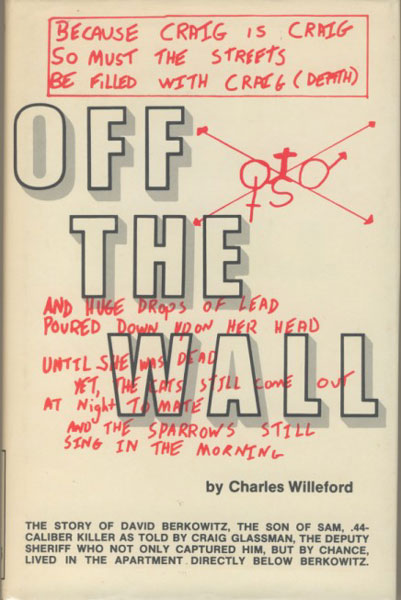 Other works by CHARLES WILLEFORD

First edition. Fine in dust jacket. When Craig Glassman moved into apartment 6E at 35 Pine Street, he had no idea that directly above his apartment in 7E, lived David Berkowitz, the .44-caliber "Son of Sam" killer. While New York City was gripped in a strangle hold of fear, not knowing where or when he would strike next, Craig Glassman had unknowingly been chosen by Berkowitz as his "master" and alter ego who had to be killed. When Glassman heard the constant pacing back and forth above his head, he had no idea that Berkowitz was blaming him for his crimes and plotting to kill him. Convinced that Glassman was the devil who had power over him, Berkowitz had to find a way to destroy Glassman. This is Craig Glassman's story, the deputy sheriff the police would not believe when he told them he was certain that the "Son of Sam" lived in the apartment above him. A story of how a city was virtually held at the point of a gun by one demented person, who by the very society he chose so viciously and cowardly to attack, was transformed from a pathetic obscure postal worker into the most feared criminal murderer since London's Jack-the-Ripper.

Mad With Much Heart
GERALD BUTLER

The Demon Of Dakar
KJELL ERIKSSON