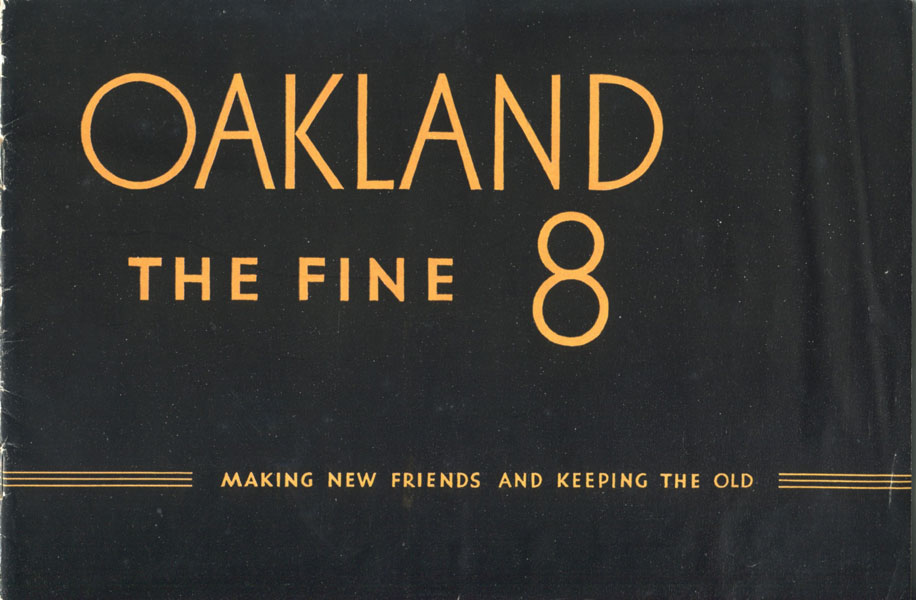 Oakland, The Fine 8. Making New Friends And Keeping The Old

First edition. 6" x 9" oblong, printed wrappers, n. p. (12 pp.), illustrated (with all car models in full-page and in color), car specifications. Shown in full color are the Custom Sedan, the Sport Coupe, the Two-Door Sedan, the Business Coupe, the Four-Door Sedan, and the Convertible Coupe. Also pictured in sepia-tone are the V-Eight engine, the Syncro-Mesh transmission, the sturdy rear axle with the heavy differential housing, Inlox rubber spring shackle bushings, new wheel and rim construction for the tires, large mechanical brakes, and the cross-flow radiator. Also promoted is the assurance of fine craftsmanship for the bodies by Fisher. The Oakland Motor Car Company of Pontiac, Michigan, was an American automobile manufacturer and division of the General Motors Corporation. Purchased by General Motors in 1909, the company continued to produce modestly priced automobiles until 1931 when it was renamed Pontiac. After one year of production, Oakland's principal founder, Edward Murphy, sold half of the company to William C. Durant's General Motors Corporation in early 1909. When Murphy died in the summer of 1909, GM acquired the remaining rights to Oakland. Within General Motors, Oakland was slotted above price leader Chevrolet and below the more premium Oldsmobile, Buick and Cadillac brand cars. Conventional 4-cylinder engined models were introduced shortly after the GM takeover. In 1916, the company introduced a V8 engine, and production soared to 35,000 in 1917, shared with the Chevrolet Series D. By early 1920, however, production and quality control problems began to plague the division. In 1921, under new General Manager Fred Hannum, a consistent production schedule was underway and the quality of the cars improved, and Oakland vehicles shared the GM A platform used by Chevrolet. One marketing tactic was the employment of a quick-drying bright blue automotive lacquer by Duco (a DuPont brand product), leading to the slogan "True Blue Oakland." The Oakland vehicle was built only in Pontiac, Michigan, which is the county seat of Oakland County. The name predates any GM association with an automobile manufacturing facility in Oakland, California, that built Chevrolet vehicles before Chevrolet joined GM called Oakland Assembly. Light wear to the spine lower edges, a tiny closed tear on lower rear cover has been internally reinforced with a small piece of cellophane tape, faint name stamp to lower margin of rear cover and penciled pricing beneath each color automobile view including the up-charge for "6 wire wheels," else a very good copy.