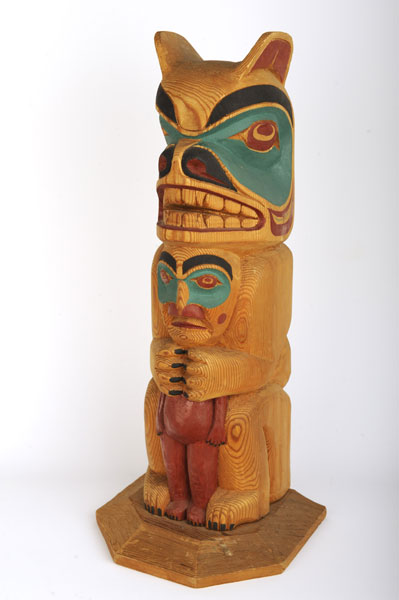 The pole measures about 17" tall x 4 1/2" thick on a 1 1/2" high base. The totem is carved by master Haisla carver Henry Venn Robertson and was done in circa 1950. This totem is also hand-painted by Robertson. This is one of the few hand-painted totems done by Robertson as he discontinued the practice of painting in about 1970. Henry Robertson (b1932 - ) is one of the finest totem carvers around, and began carving at age 10 under the direction of his father, Gordon Robertson. Henry's traditional name is Ga-ba-baawk, which means Ten Ravens in English. In the many years that he has been carving wood, he has had many exhibitions in galleries throughout Canada and the United States. He has carved many smaller carvings and smaller totems and feasting bowls, but enjoys especially carving large, full scale totem poles. This totem features very finely sculpted imagery of a large bear-like creature in a green, black, and maroon face with mouth open and showing individually carved teeth. His arms are wrapped around a human-like creature with the face painted in green, black, and maroon, the body in maroon with black finger and toe nails. The claws and feet of the bear-like creature are also painted in black. The totem is signed in pencil on the back, "Henry Robertson, Kemano, B.C." Henry's work, although never widely promoted commercially has always had a strong following, and his classic carving style and fine attention to detail ranks among the very best of carvings anywhere. A fine totem pole with no flaws and one of the few hand-painted examples of the carver's work.

A Trail Is Never Cold. The Life And …
by Jr., Lawrence Melton

Oxy: A Glimpse Of The Past
by Oxy Usa