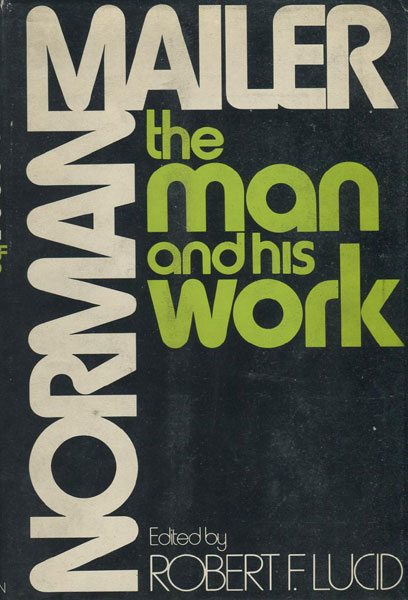 Norman Mailer. The Man And His Work.

First edition. Near fine in dust jacket with light wear to spine ends and the extremities. A collection of essays about Mailer. Leo Bersani thinks of him as an American Balzac, Diana Trilling says flatly that 'Mailer is no Balzac of the twentieth century.' Tom Wolfe jestingly compares Mailer with Dostoevsky, then opts for James M. Cain. Norman Podhoretz tells us that the essence of Mailer's strength as a novelist is that he 'never pays much attention to intellectual fashion,' but Calder Willingham derides him for a 'slavish obeisance to intellectual fashion.' The best essays, those by Podhoretz and Trilling, deal impressively with Mailer's 'moral radicalism,' his changing ideologies, the fierceness of his concerns with collectivism and individualism, God and the Devil -- the sort of philosophical hipsterism which was so prevalent in the '50's and early '60's when these essays were first published. Such later effusions as An American Dream and Why Are We in Vietnam?, or the superb reportage about the Pentagon and Miami, are also discussed, though with much less clarity and conclusiveness. Mailer remains, of course, a complex presence on the literary scene."

The Viceroy Of Ouidah
by Bruce Chatwin

The Songlines
by Bruce Chatwin