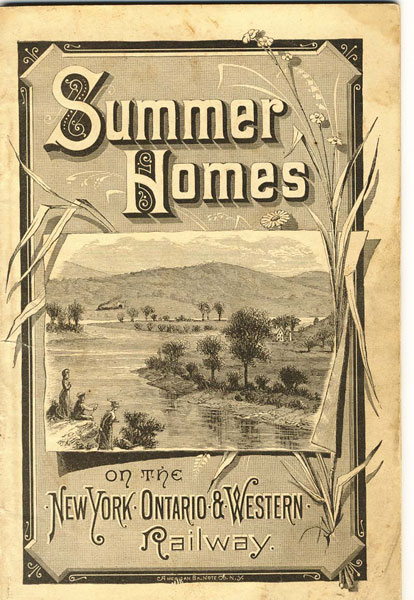 New York, Ontario And Western Railway Co. Season Of 1880. From The Lakes To The Ocean! Beautiful And Picturesque Scenery. Healthful Gummer Resorts Among The Mountains At An Elevation Of 1,600 Feet Above The Sea. Within Four To Ten Hours From New York City

First edition. 8vo. 8" x 5 1/4" pictorial wrappers, 45 [3] pp., illustrated, map, advertisements. The folding map is bound in at the very front and is a map of the New York, Ontario & Western Railway and branches and shows the line running from New York City to Oswego and stations in between. There are 10 steel engraved full-page plates of New York towns and views, and a brief sketch of all of the towns along the route to Oswego. An interesting advertisements promotes farms for sale priced from $15.00 to $40.00 an acre. A long list of hotels, boarding houses and private families on or near the route of the New York, Ontario and Western Railway, is provided. Covers lightly soiled else a very good copy of an interesting an informative booklet.

Thirty Summers And A Winter.
by Evelyn. Mertie

Letter From The Secretary Of The Interior, Transmitting …
by O. H Browning