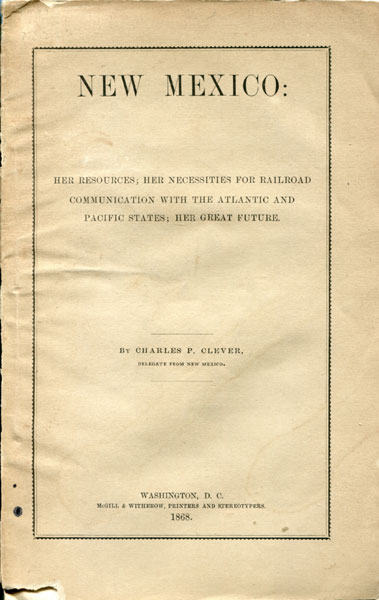 New Mexico: Her Resources; Her Necessities For Railroad Communication With The Atlantic And Pacific States; Her Great Future

First edition. 8vo. Printed wrappers, 47 pp. Charles P. Clever (1830-1874) was born in Cologne, Prussia and immigrated to the U. S. in 1848 and settled in Santa Fe, New Mexico in 1850. He was appointed U. S. marshal for New Mexico in 1857. He was one of the owners of the Santa Fe Weekly Gazette in the late 1850's. He served as adjutant on the staff of General Canby at the Battle of Valverde, and was adjutant general of New Mexico 1861-1865 and 1867-1868, and served as attorney general 1862-1867. He was the Democratic Delegate-elect to the Fortieth Congress and served from September 2, 1867 to February 20, 1869, when he was succeeded by J. Francisco Chaves. In this scarce pamphlet he describes the mineral resources and agricultural potential of New Mexico in detail and proposes the building of a western railroad from Memphis, through New Mexico, to San Diego, California. Some material on the potential for livestock. Much on mining. One of the earliest New Mexico promotional pamphlets. Light chipping to the spine, small chip at bottom of front cover, else a very good copy of a scarce and seldom available item.

The History Of Eagle River, Michigan
by Clarence J. Monette