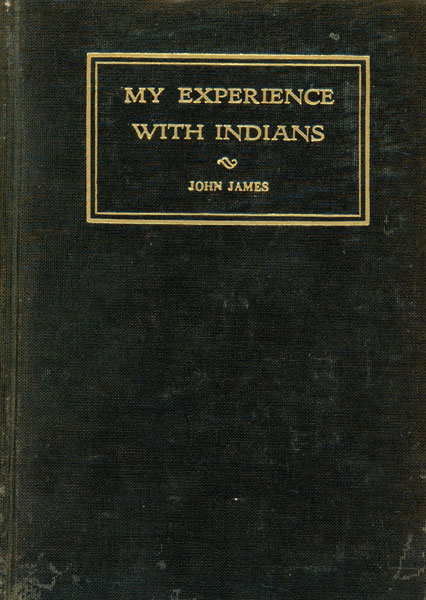 My Experience With Indians

Other works by JOHN JAMES

First edition. 12mo. Dark blue cloth, titles stamped in gilt on the front cover, [12] - 13 - 147 pp., preface, frontispiece (the author aged 72), illustrated, portraits, facsimiles. Contains the book plate of J. B. Milam, Principal Chief of the Cherokee Nation from 1938 to 1949, successful businessman and collector of books on Native Americans, on the front pastedown sheet. Adams Six-Guns 1153: "Scarce." In 1869, the author with his parents moved from Illinois to Johnson County, Texas. His first encounter with Indians was crossing through Indian Territory. Later, he would have contacts with Comanches while teaching in Wise and Johnson Counties. In the 1880s, he taught at the Stock Bridge Academy, a school for the Choctaw tribe in Indian Territory. As a result, there is a great deal of information on their customs, religion and daily lives based on his personal experiences. He relates his many positive experiences with the Comanches, Choctaws, and other tribes and paints a sympathetic picture. The appendix contains speeches of notable Indian leaders. Slight age toning to the pages, else bright and near fine (no dust jacket issued).

Miles And Miles Of Texas. 100 Years Of …
CAROL WITH ROGER ALLEN POLSON DAWSON

Szmimeie-S Jesus Christ. A Catechism Of The Christian …
MISSIONARIES OF THE SOCIETY OF JESUS [COMPOSED BY]

Seldom Heard. Ranchers, Ranchos & Rumors Of The …
DIAN I MALOUF