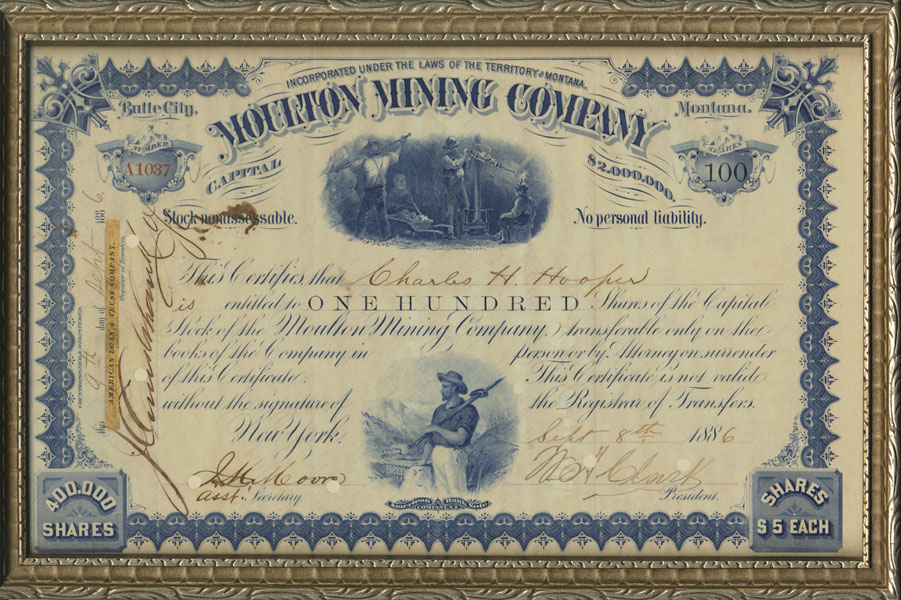 7" x 11" engraved certificate from the Moulton Mining Company issued to Charles H. Hooper. This is certificate #A1037, stating that, "This Certifies that Charles H. Hooper is entitled to ONE HUNDRED Shares of the Capital Stock of the Moulton Mining Company, transferable only on the books of the company in person or by Attorney on surrender of this Certificate. This Certificate is not valid without the signature of the Registrar of Transfers. New York. Signed by S.M. Moore, Asst. Secretary and by W.A. Clark, President, Sept. 8th, 1886." "Countersigned and Registered this 9th day of Sept., 1886. American Loan & Trust Company. Signed by the Registrar of Transfers. Certificate ornately bordered and with vignettes of men working in a mine and with Square in bottom corner stating, "Shares $5 Each." "The Moulton Mining Co., reincorporated in 1884, is presided over by W. A. Clark. The company's property is west of the Alice, where the celebrated Moulton Mill of forty-stamps stands. The product in 1883 was $376,684, and in 1884, $600,000. A very important mining transaction took place on the 3d of July, 1884, by which the Moulton Mill and Mining Company of Utah took the name of the Moulton Mill and Mining Company of Montana. The transfer includes the mine, the forty-stamp mill, and all the properties of the former company. The condition of the mine at the close of 1884 is as follows: 400,000 shares, quoted December 20, 1884, $1.05; last dividend December 4, 1884, 7 ½ cents per share - $30,000; total dividends to date, $80,000. The Silver Safe is an extension of this mine and owned by the same company." W.A. Clark moved to Montana in 1863. He settled in Bannack, Montana, the capital of the territory, and began placer mining. He later became a banker in Deer Lodge, Montana, and made a small fortune by repossessing mining properties when their owners defaulted on their loans. Entering into politics, Clark served as president of both of the Montana state constitutional conventions and became a hero in Helena by campaigning for its selection as the state capital instead of Anaconda. He used his newspaper, the Butte Miner, to further his political ambitions, and was successfully elected to the United States Senate in 1899. It was discovered, however, that he had bribed members of the Montana State Legislature for their votes, and the Senate refused to seat him due to the scandal. Later he launched a successful campaign and served as a United States Senator from Montana from 1901 through 1907. Certificate is framed with form indicating "No. A1037 to 1041 Incl. 100 Shares Issued to Charles H. Hooper. 24/20. Date Sept. 8th, 1886. Received the above described Certificate."